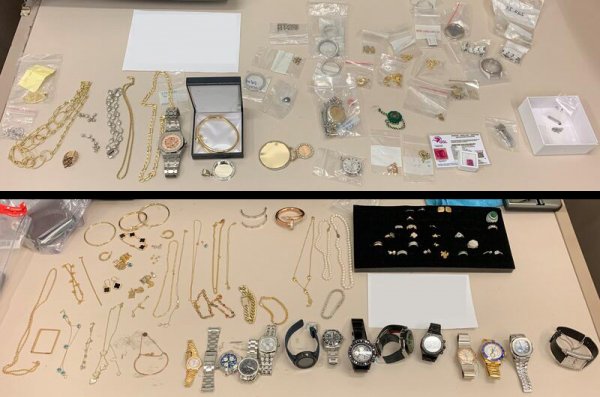 A year-long investigation into a pair of robberies involving $1.3 million worth of stolen jewellery and two torched cars has led to three arrests in the Greater Toronto Area (GTA).

The first of the incidents occurred on Apr. 29, 2020, near Leslie Street and Elgin Mill Road East in Richmond Hill, Ont. Investigators allege a man entered a store and pointed a gun at an employee. A second man then entered the store and the two tied up the employee before taking a large amount of jewellery and the staff member’s car keys.

The men fled in the stolen car, which was later found abandoned and torched.

On Nov. 28, 2020, officers were called to another armed retail robbery near Bathurst Street and Sheppard Avenue West in North York.

In this instance, Toronto Police say a man entered a store armed with a handgun and a knife. He reportedly assaulted the employee and tied them up before taking a large amount of jewellery and the employee’s car keys.

The car, which was used to flee the scene, was, again, found abandoned after being set on fire.

During the investigation, the squad executed 12 search warrants, resulting in the identification of three men allegedly involved in the armed robberies. Clothing worn during the incidents was located, as was a loaded handgun. A large amount of the stolen jewellery was also recovered.

On May 25, Toronto Police announced Shawn Fries, 55, and Julianno Petrella, 22, both of Woodville, Ont., and Aram Al-Kamisi, 26, of Bowmanville, Ont., had been arrested on April 22, 2021. They are each facing multiple charges.