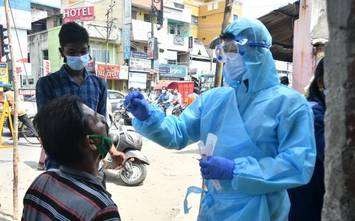 Of the total 38 districts, Tiruvannamalai has reported close to 40 per cent and some are over 30 per cent

As daily new Covid-19 infections continue to move northwards in Tamil Nadu, 34 districts, of the 38 in the State, have reported more than 10 per cent positivity rate.

This is well over twice the positivity rate of 4.8 per cent in the State a month ago.

The government data is provided for 37 districts (Nagapattinam district includes data of Mayiladuthurai, which is now 38th district, also).

During January and February, overall positivity rate dropped to a percentage point with about 500 infections per day. However, the new infections started to increase significantly from the second week of March to second week of April.

This was the time Tamil Nadu was witnessing election rallies and other public events.

“Political rallies, violation of norms and absence of protective measures during election campaign and other functions have been the major reasons for increase in new cases,” said a senior official in the Health department.

The State government then embarked on a multi-pronged strategy last month to contain the new infections. It started to ramp up RT-PCR tests to more than 90,000 per day and it stands at about 1.4-1.5 lakh now. Micro-containment zones were identified and monitored in addition to restriction of crowd at public and family functions. Hospital and medical infrastructure were also ramped up.

However, with no sign of improvements, the new government in the State has announced a complete lockdown from May 10 to 24.

But, health experts reckon that the way forward is to accelerate vaccination drive. “Vaccines protect against severe disease, hospitalisation and death. Everyone who has access to a vaccine should take one. All vaccines reduce the severity of the disease,” Soumya Swaminathan, Chief Scientist, World Health Organization, said on her twitter page.

Tamil Nadu needs to catch up with many other States in vaccination as only 6.30 per cent of its population has received at least one dose, while many States that have lower cases are ahead of Tamil Nadu in administering vaccine doses.

“Tamil Nadu generally does well when it comes to vaccination. For eg, in polio vaccination programmes, the State has done much better than others due to the health department’s network and infrastructure. It should draw up a strategy to vaccinate a significant portion of population in the next few months,” said a retired official from TN Health Department.