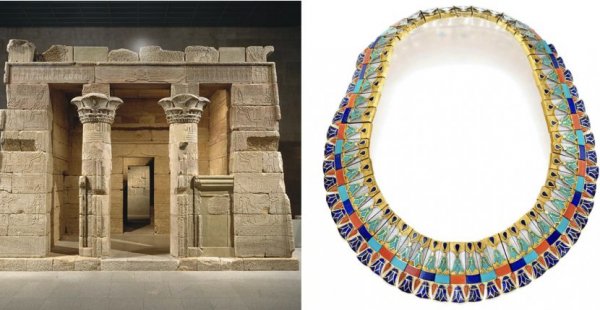 M.J. Rose imagines the life story of the owner of a 1960s Cartier necklace

This is what I imagine.

In 1963, the Temple of Dendur was dismantled as part of a UNESCO project, in order to protect it from flooding in Lake Nasser, following construction of the Aswan High Dam.

In recognition for its assistance, the temple was gifted to the United States.

For the next two years, in what was dubbed the “Dendur Derby,” various museums vied for the right to host the temple. Finally, on April 27, 1967, the 15 BC monument was awarded to the Metropolitan Museum of Art. 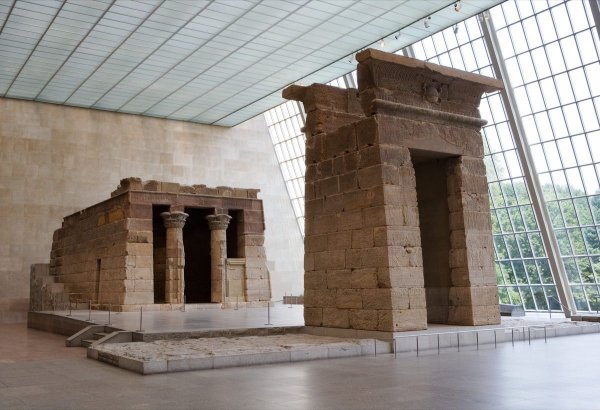 There was someone else involved, albeit deep in the background, one of the museum’s benefactors, a woman who wished to remain anonymous. She had been instrumental in ensuring the temple dedicated to the Goddess, Isis, came to the Met, not the Smithsonian or Boston Museum of Fine Arts, which had been strong contenders.

On the day of the announcement, to celebrate what the benefactor had helped orchestrate, she donned a light coral wool coat and gloves and walked from her Fifth Avenue apartment downtown to Cartier’s. It was only 45 degrees out and windy, but she was determined to enjoy the journey. Even if very few people knew what she had accomplished, she intended to mark the occasion with something special. 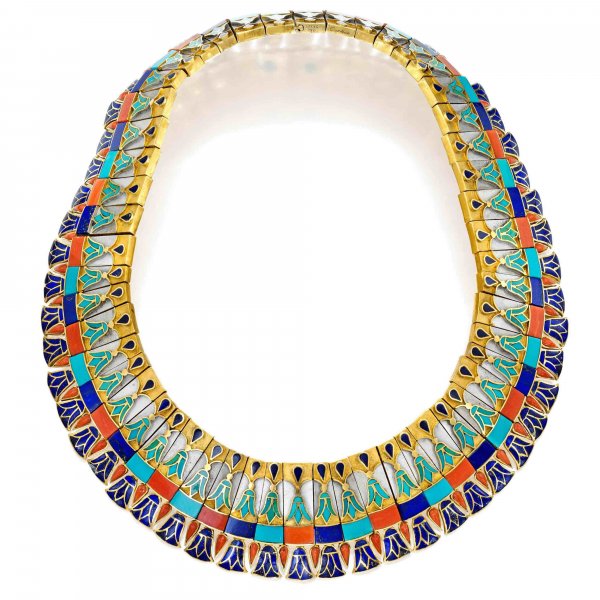 There were other things about her very few people knew: one was her belief in reincarnation and her conviction that she had spent a lifetime in ancient Egypt as a priestess at Dendur.

Temples were places for the gods to reside on earth, linking human and divine realms and giving humans the ability to interact with the god through rituals. That this temple from her previous life would be resurrected in the museum she had loved and helped flourish in this life, was closing a circle. 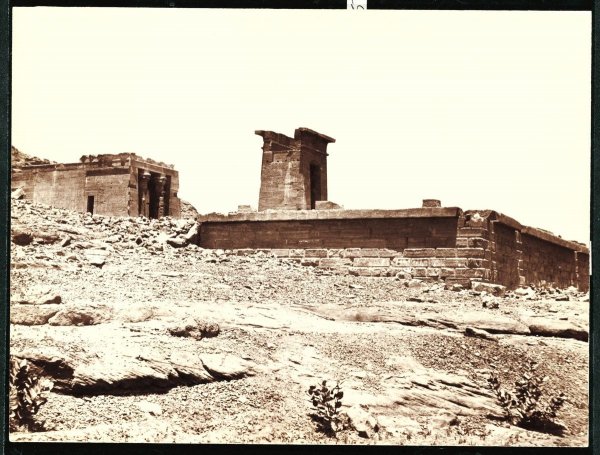 The benefactor’s initial fascination with Egypt had been piqued, when, as a young woman, she attended a tea at a mutual friend’s home. There she met the renowned Lady Evelyn Beauchamp, the daughter of George Herbert, 5th Earl of Carnarvon, who had funded the archaeologist Howard Carter’s extensive search in the Valley of the Kings.

On November 26, 1922, at the age of twenty, Lady Beauchamp, along with her father and Carter, had been the first people to see inside Tutankhamun’s tomb in more than 3000 years.

Over finger sandwiches and lapsang souchong in Limoges cups, Lady Beauchamp described the golden, glittering items she had seen upon entering that long hidden tomb. 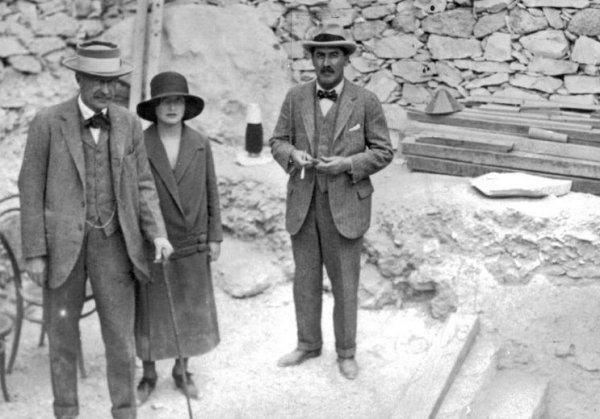 As the benefactor had listened, she experienced a strange déjà vu. She had known what Lady Beauchamp was describing even before the description was complete.

And so began her lifelong fascination with learning about ancient Egypt, collecting artifacts, and studying reincarnation. But it wasn’t until the benefactor saw one of Carter’s finds, the King’s Wishing Cup, a chalice in the shape of a lotus, that she felt compelled to search out her own past life.

She was certain, though she didn’t know why, that she had once used a cup like that to offer a special drink to those in need of soothing and that the lotus held special meaning for her.

On her first visit to Egypt, the benefactor searched out a wizened old man who claimed to still practice the ancient arts with the same herbs and plants used thousands of years before. He said he could replicate the elixir for her. 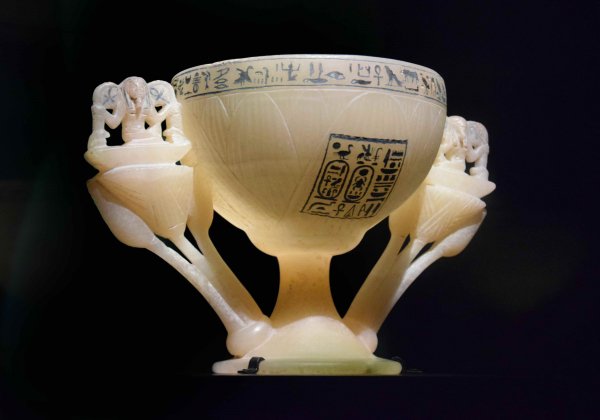 It was with excitement that the benefactor imbibed the wine made with the sacred weed, the blue Egyptian lotus (Nymphaea caerulea). A psychoactive plant, the lotus is also known as the blue water lily, and the sacred blue lily. Used as a symbol in Egyptian art, the lotus represents the sun, creation, rebirth, regeneration and reincarnation, all for good reason. When soaked in wine, the flower releases an anti-spasmodic called Nuciferin, and likely aporphine, which is a hypnotic sedative and aphrodisiac.

The benefactor was forever changed by the visions she experienced that afternoon under the influence of the lotus wine. She was certain she had been shown her past life—learned what she had done as a priestess, who she had loved and who she lost, her shortcomings and her talents. She’d even been able to look down and see her body laid out in funerary attire wearing a shimmering breastplate made of gold, carnelian, turquoise and lapis, all in the lotus motif. As she left her tomb she stopped, looked back and read the phrase chiseled on the lintel, understanding it even though it had been written in hieroglyphs.

And then through all time, her soul and his were able to find each other again and again whenever the lotus bloomed. 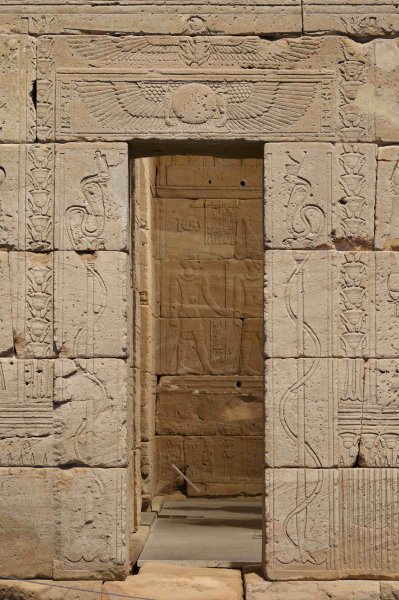 The benefactor was never able to regress again, but what she had learned that day was enough to sustain a lifelong search for Egyptian artifacts featuring the lotus motif.

She found quite a few pieces over the years including two 1920s Cartier brooches incorporating pieces of ancient faience. One of a bust of the goddess Sekhmet, set against a lapis lazuli sky twinkling with diamond stars and a repeating diamond-set stylized lotus motif. Another of a fan shaped fragment inscribed with hieroglyphs, a border of papyrus and lotus motifs decorated with sapphires with a base centering on a stylized lotus. 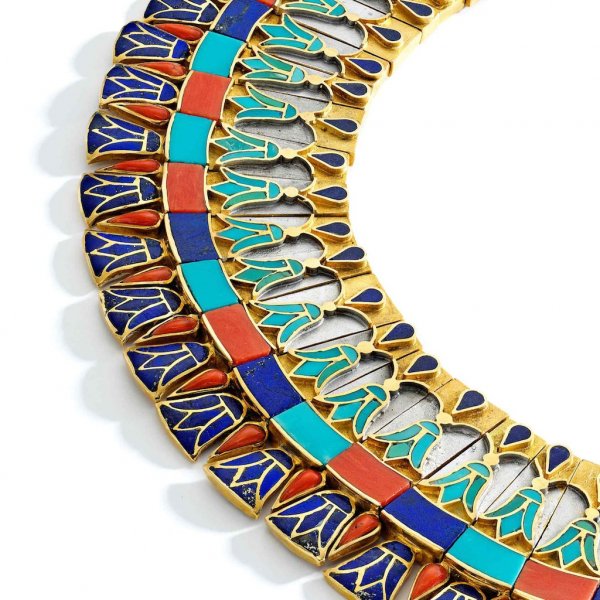 But the benefactor never located the one piece she was looking for — the shimmering breastplate made of gold, lapis and carnelian with the lotus pattern she had been buried with. That one remained elusive.

And so on that April afternoon in 1967, she sat down with the manager of Cartier’s, in New York City—at once further from Dendur and yet closer than she ever thought she’d be—and sketched out the necklace that had haunted her dreams for so long.

Editor’s note: The story of the silent benefactor is fiction. The story of the Temple of Dendur and how it came to New York, as told here are facts and so are the names of those involved including Lady Evelyn Beauchamp. Jackie Kennedy Onassis’s love of Egypt was well known and extended to her publishing many books on the subject when she was an editor at Doubleday. One such book, Search for Omm Sety: A Story of Eternal Love (1987), a non-fiction reincarnation story written by Jonathan Cott, partially inspired this column.

M.J. Rose is a New York Times bestselling author; her most recent novel, The Last Tiara (February 2, 2021) has been hailed by Publishers Weekly as: “Engrossing… A wonderfully twisty plot that keeps the reader wanting to know more… [a] winning story.”