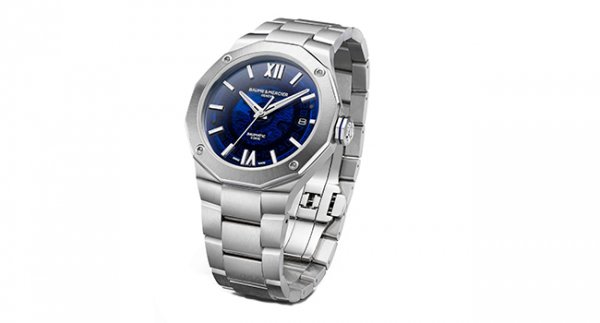 The Riviera was named for the iconic French coastline, with the unusual design representing “freedom and renewal” as well as “offbeat elegance”.

"More than any other, the Riviera collection demonstrates the expertise of Baume & Mercier in the field of unusually shaped watches"Baume & Mercier statement

Unveiled during the recent Watches & Wonders Geneva virtual event, the new Riviera collection features self-winding models for men and women in case sizes from 36mm to 42mm, as well as a model housing the brand’s signature Baumatic calibre, which provides a five-day power reserve.

A statement from Baume & Mercier read, “The Riviera is making a comeback that strikes a balance between its roots in avant-garde ‘70s design and the sport-minded classicism of today’s watches. More than any other, the Riviera collection demonstrates the expertise of Baume & Mercier in the field of unusually shaped watches.

Of the original model, the statement said, “Known for its twelve-sided bezel reflecting the twelve hours displayed on its dial, this unique watch left an impression. The icon of a nonchalant generation, it has always carried the Baume & Mercier fundamentals in its genes: a love of design, a regard for form, and a desire for boldness.”

The ‘revamped’ Riviera follows other Baume & Mercier archival revivals, such as the Art Deco-inspired Hampton Collection, which was unveiled at the digital Watches & Wonders Geneva event in 2020.