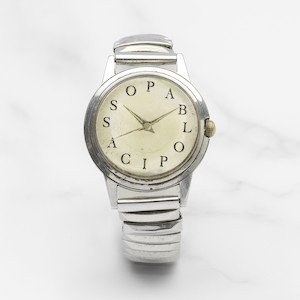 However, it turns out the famed artist was. He owned a Jaeger-LeCoutre and Rolex GMT-Master, and was known to wear at least three distinct watches while he painted.

Those three timepieces have achieved a certain notoriety: Two of them are currently said to be owned by the Picasso Foundation. The third was believed to have been lost—until now.

The timepiece is particularly intriguing because instead of numbers on its dial, it features letters that spell out Pablo Picasso (which, conveniently, has 12 characters).

Said the auction house: “This watch is…a superb example of the 12-digit name tradition, replacing the numerals on the watch dial with the owner’s name, which goes back to the 1700s. It is rather fitting that Picasso followed this trend, as he was famous for being a great self-publicist.”

The watch is believed to have been produced by the Swiss watch producer Michael Z. Berger around 1960. According to Bonhams, Picasso took the timepiece off his wrist one day and gave it to a friend, the Greek sculptor Lela Kanellopoulou. It has been consigned by one of her relatives.

“This is of great interest not only to watch connoisseurs but also to collectors of Picasso, and we very much look forward to seeing how it is received in the saleroom,” said Jonathan Darracott, Bonhams global head of watches, in a statement. “Just occasionally I have had a chance to hold history and intrigue in my hands in the form of a watch, and this has to have been one of the most befitting to make a lasting impression—the likes of which I will not see again.”