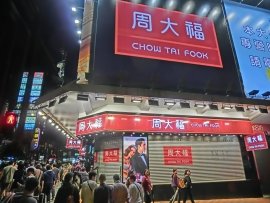 Hong Kong’s leading diamond jewelry retailer Chow Tai Fook unexpected released key unaudited data for the two months ended 29 February 2020, revealing that sales at all points of sale in Mainland China fell 42 percent while those in Hong Kong and Macau fell 60 percent in the first two months of 2020. The jeweler attributes the decline to the temporary shutdown of “the majority” of its stores in China and Hong Kong due to the Covid-19 outbreak.

Chow Tai Fook said the majority of their points of sale in Mainland China were temporarily closed since late January 2020, while those in Hong Kong and Macau closed from early February. As of 29 February 2020, however, approximately 70% and 64% of their POS in Mainland China and Hong Kong and Macau resumed operations. The group’s production facilities in Shunde and Shenzhen resumed operations gradually following the permissions of local governments, while the Wuhan Production Centre was still under temporary suspension until further notice. Chow Tai Fook says it has sufficient jewelry production to maintain the business.

The announcement adds, “Inventories have been built up before Chinese New Year to meet festive demand. However, due to the weakened consumer sentiment and sluggish demand during the Period, the Group expects the inventory will remain at a higher level than usual in the short term.”