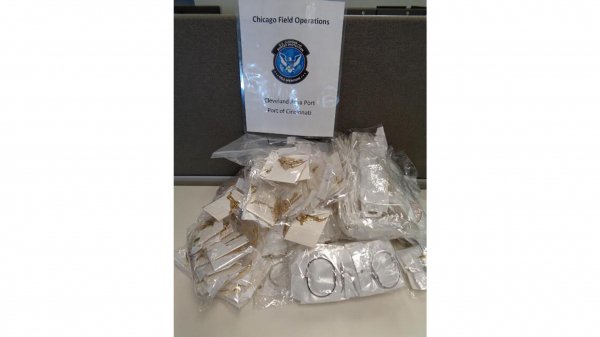 Counterfeit Gucci and Chanel pieces were among the items CBP officers in Cincinnati nabbed last month.

The package, originating from China and heading to New York City, was labeled as a shipment of stainless steel bracelets worth $367, CBP said in a news release issued last week.

Officers found it contained 364 pieces of counterfeit jewelry. If genuine, the jewelry would be worth $717,930.

The shipment held necklaces, bracelets, earrings, and other items said to be from luxury brands like Michael Kors, Louis Vuitton, Gucci, and Chanel.

The pieces were mixed in with jewelry that did not have protected trademarks, said CBP.

This seizure is the latest in a line of counterfeit jewelry shipments Cincinnati CBP officers have nabbed in recent months.

Last month, officers seized a shipment of counterfeit jewelry that would be worth $866,120 if it had been genuine.

In fiscal 2019, CBP and its partner agency, Homeland Security Investigations, seized 27,599 shipments containing IPR violations with a manufacturer’s suggested retail price of more than $1.5 billion, if the goods had been genuine.

Watches and jewelry represent 15 percent of all intellectual property rights seizures, said CBP, topping the list of all items seized due to IPR infringement.

“Protecting the American economy protects the American people,” said Cincinnati Port Director Richard Gillespie. “Our officers continue to use their training, knowledge, and skills to identify high-risk shipments and shut down illicit suppliers.”