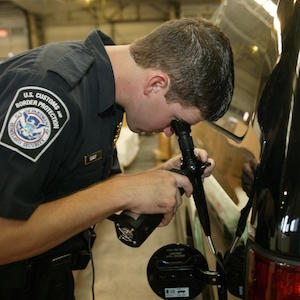 While most shipments of fakes concentrate on duplicating one specific trademark, this package contained a potpourri of noted jewelry names. Among the fakes were copycats bearing protected trademarks from Tiffany & Co., Pandora, Cartier, Bulgari, Dior, Gucci, Chanel, Rolex, Versace, and Tous.

The shipment originated in China and was destined for an address in McAllen, Texas.

The illegal fakes were mingled with “generic” jewelry, which is not subject to trademark regulations. But there was a problem even with those items, the CBP said, as the pieces were undervalued on the shipment invoice, which gave a declared value of only $119.

Fake watches and jewelry represent 15% of all intellectual-property-related seizures, the CBP said, and those categories continue to be among the most frequently seized items.

This latest seizure is just one of a number the CBP has made lately. On March 4, officers at the Cincinnati port seized two shipments containing over 700 counterfeit jewelry items: one with 543 bracelets and rings with fake Cartier emblems, and another with 191 bracelets, rings, and earrings said to be Cartier and Hermès.

The shipments were headed to private residences in Jeffersonville, Ind., and Miami Beach, Fla.

On Feb. 11–12, CBP officials in Cincinnati seized two packages with a similar grab bag of names. One came from Quezon City, Philippines, and was headed to a private residence in Aurora, Ill. Despite its declared value of $50, the package held 237 items of jewelry and watches falsely labeled as Hermès, Chanel, Cartier, Gucci, Tiffany & Co., Louis Vuitton, Van Cleef & Arpels, Bulgari, and Rolex.

The second contained 87 counterfeit Rolex, Cartier, Audemars Piguet, and Panerai watches. It originated in China and was headed for an address in New York City.

And on Feb. 1, CBP officials in Louisville, Ky., seized a package with 177 bracelets, 57 rings, and 12 necklaces—all of them falsely bearing the Cartier trademark.