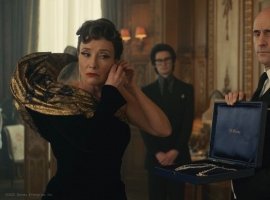 A selection of De Beers signature high jewelry designs dazzle in the Disney film “Cruella”. The film starring Emma Stone as young Cruella, an aspiring fashion designer, and Emma Thompson as Baroness Von Hellman, the villainous owner of a renowned but tired fashion label, is set against the backdrop of 1970s London. The new take on the Disney classic 101 Dalmatians follows the rebellious early days of one of cinema’s most notoriously fashionable villains.

The De Beers pieces captured on screen and worn by the character Baroness Von Hellman include the Arpeggia five-line necklace and three-line earrings in white gold, Diamond Legends by De Beers Cupid necklace – a modern take on the diamond line. Two symmetrical lines of princess-cut diamonds form the body of this elegant necklace, framed by a row of marquise-shaped diamonds, their form mirroring Cupid’s feathered wings. Other prominent pieces were the Swan Lake necklace in white and yellow gold and the Assana necklace with a total carat weight of 37.47 Cts.

The film leans toward a female audience who is ready for a fabulous night on the town after a year of lockdown. In addition to De Beers Jewelry, Disney’s advertisers for the film were high-end luxury names such as Louis Vuitton, MAC Cosmetics, and Tom Davies eyewear.