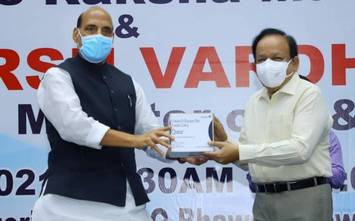 2-DG will be available to govt and private hospitals, price not known, says DRL

Dr Reddy’s Laboratories (DRL), which in collaboration with Defence Research and Development Organisation (DRDO) scientists developed the anti-Covid drug 2-DG (2-deoxy-D-glucose), is hoping to commercially launch it by early June.

DRL co-Chairman K Satish Reddy, said: “After that (launch), there will be a progressive ramp up in production and our team is working hard for that.” He was participating in a virtual event to dedicate the first batch of 2-DG medicine to the nation by Defence Minister Rajnath Singh here. Reddy said the drug would be available to both the government and private hospitals. However, its price is not yet known.

DRDO’s anti-Covid drug gets nod for emergency use

DRL is the manufacturing partner for the drug, developed by scientists at the Institute of Nuclear Medicine and Allied Sciences, a DRDO lab located in Delhi. Though the molecule was originally developed as a potential therapeutic agent in the treatment of some cancers, it was recently re-purposed to be used as an adjuvant in treating moderate to severe Covid-19 patients in hospitals.

The drug contains a glucose analogue called 2-DG, which works by inhibiting viral growth in the body. Viruses typically require oxygen to survive. When the drug is injected into the body, it gets attached to the virus and prevents it from multiplying. The scientists claimed that it can thus limit complications and severity associated with the infection.

Clinical trial results have shown that this molecule helps in faster recovery of hospitalised patients and reduces supplemental oxygen dependence. Higher proportion of Covid patients treated with 2-DG showed RT-PCR negative conversion. Early this month, the Drugs Controller General of India had granted permission for its restricted use in emergency conditions.

The Defence Minister handed over the medicine to Health Minister Harsh Vardhan at the event, who in turn gave one box of 2-DG each to the All India Institute of Medical Sciences Director Randeep Guleria and Lt Gen Sunil Kant of the Armed Forces Medical Services.

“2-DG drug is a new ray of hope in these challenging times,” said Singh, expressing confidence that the medicine will play a crucial role in the fight against Covid-19.