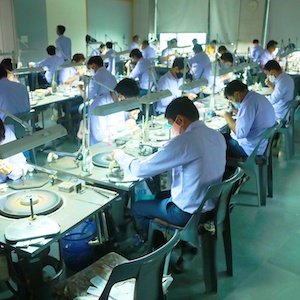 The Office of the United States Trade Representative (USTR) has postponed a possible 25% duty on Indian jewelry for six months, giving the countries time to come to terms on an unrelated trade dispute.

The USTR had proposed 25% tariffs on a wide range of jewelry items, in response to digital service taxes imposed by India on U.S. e-tailers that the agency considers “unfair and discriminatory.” The USTR had warned the duties could take effect soon.

The tariffs would have taken a large toll on the Indian jewelry sector; of the 40 Indian items the USTR wanted to make subject to tariffs, 17 were related to jewelry, including gold and silver items. The tariffs would have also affected several Turkish jewelry items, sparking outcry from the industry in that country. While Italy was also subject to tariffs, the list of subjected items did not include jewelry.

The move was not entirely unexpected, with Politico’s Doug Palmer predicting in May that any tariffs would likely be suspended for six months.

But the threat is not over, with United States Trade Representative Katherine Tai warning in a statement that imposing tariffs remains an “option” if the upcoming months of talks fail to bear fruit.

“The United States is focused on finding a multilateral solution to a range of key issues related to international taxation, including our concerns with digital services taxes,” she said. “Today’s actions provide time for those negotiations to continue to make progress.”

The mere threat of the United States imposing a 25% jewelry duty garnered considerable alarm in India. Speakers from the country’s apex body, the Gem and Jewellery Export Promotion Council (GJEPC), made their case against the tariffs at a public hearing on May 10.

“The imposition of the proposed 25% import duty on 17 Indian jewelry items would have immensely impacted this labor-intensive sector with loss of jobs and livelihoods and a shift of business to countries such as China and Mexico,” said GJEPC president Colin Shah in a statement.

“American jewelry companies also bank on Indian companies to fund their business by giving long credit and memo facilities, which would have major repercussions. Indian companies have established an estimated 500 offices around the USA that provide thousands of high-paying white-collar jobs to locals; the imposition of [a] duty could affect all these jobs as the Indo-U.S. jewelry business would become unviable.”