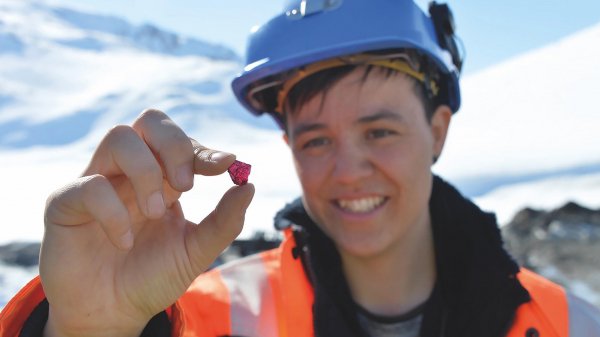 The first of three rounds of funds from the Nebari Natural Resources Credit Fund is expected by the end of the month.

Known as Project Aurora, the financing will be spread over three tranches, Greenland Ruby said. It expects to receive the first round of funding by the end of May.

Greenland Ruby CEO Magnus Kibsgaard said the money will be used to continue mining at the current site as well as to begin activity at the company’s other licensed sites, where it has begun exploration.

The company started mining rubies and pink sapphires at Aappaluttoq in southwest Greenland in 2017 after being awarded a mining license from the country’s government.

Aappaluttoq is the first colored gemstone mine in Greenland. The current mining site is expected to have 10 years’ worth of gem-quality ruby and pink sapphire, but two other licensed mining areas will also help continue to supply the industry in the future, according to Greenland Ruby.

The company can trace each gem from mine to market through a customized inventory system that assigns each parcel of rough with a number and then gives all gems within that parcel their own individual numbers to track them through treatment, cutting, and setting.

A portion of Greenland Ruby’s global gem sales go to its PinkPolarBear Foundation, a nonprofit organization that supports education and research into the effects of climate change in the Arctic, with a particular focus on Greenland.

Nebari Natural Resources Credit Fund, meanwhile, is a financier in the mining sector.

“I want to thank the Greenland Ruby team, who are working extremely hard to make the company a great success,” Kibsgaard said.

“I also want to thank our shareholders who have been visionary in investing with us over the years. Greenland Ruby is dedicated to our project’s ongoing success. This financing is occurring at a pivotal moment when all eyes are on Greenland. Our responsible mining practices will pave the way for future sustainable investment and development in the sector.”
Source