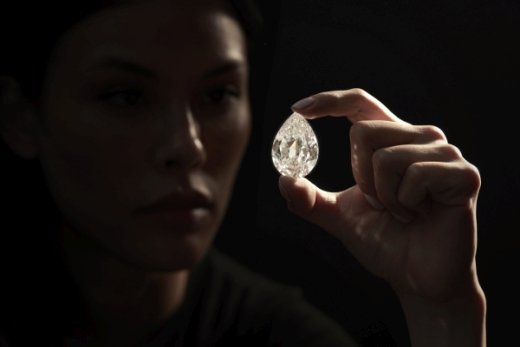 Sotheby’s will auction a massive flawless diamond valued at up to $15 million next month, making the rare move of accepting payment in cryptocurrency.

Carat is a generally accepted unit of measure for the mass of gemstones. It is equal to one fifth of a gram and is denoted as ct.

The pear-shaped, 101.38-carat, D-color diamond, known as The Key 10138, will feature in a single-lot live auction in Hong Kong on July 9, Sotheby’s said Monday. The diamond is the first jewelry piece for which the company is accepting digital coinage, and carries the highest estimate ever for a physical object publicly offered for purchase with cryptocurrency, it added. The buyer can pay for the stone with regular currency as normal, or use Ether or Bitcoin.

Sotheby’s estimated the selling price at $10 million to $15 million. At today’s conversion rate, that would be the equivalent of around 303 to 455 bitcoins.

“Over the past year, we’ve seen a voracious appetite for jewels and other luxury items from collectors across the globe,” said Josh Pullan, managing director of Sotheby’s global luxury division. “Increasingly, that demand is coming from a younger, digitally native generation, many of whom are in Asia.”

Having observed demand for payment in cryptocurrency, the auction house first tested the option in May with the sale of Love Is in the Air, a work by popular artist Banksy, said Wenhao Yu, deputy chairman of jewelry for Sotheby’s Asia. That was followed by Natively Digital, a sale of non-fungible tokens (NFTs), which took place earlier this month.

“Now, the moment is just right to introduce the crypto payment option to luxury, with one of earth’s rarest and greatest treasures,” Yu told Rapaport News. “This marks another unprecedented move for the sale of important diamonds. We will continue to explore [cryptocurrency] opportunities for other jewelry [as well].”

Fewer than 10 diamonds over 100 carats have ever been offered at auction, and only two of those have been pear-shaped, Sotheby’s said. The Key 10138 is the second-largest pear-shaped diamond to appear on the public market, following the Winston Legacy, the company noted. That stone, a 101.73-carat, D-flawless, type IIa diamond, fetched $26.8 million at Christie’s in Geneva in 2013.

The diamond’s name reflects its carat weight, as well as the significance of keys as a “symbol of power and…freedom,” Sotheby’s added.

“Diamonds are keys to understanding the history of the Earth, reminding us of our human condition and the transcendental power of beauty,” Yu added. “With the name The Key 10138, we wanted to celebrate this enlightening virtue, while also alluding to the crucial function of digital keys in the world of NFTs and cryptocurrency.”