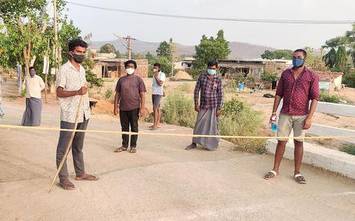 Even as India grapples with the devastating second wave of Covid-19, two villages — one in Kerala and the other in Telangana — are successfully holding out, thanks to their strict measures. Edamalakuddy in Kerala’s Idukki district and Ragojipet in Telangana’s Jagitial district could well be held up as case studies for the way they have managed to keep the virus out of their soil.

Ragojipet had a brush with the Covid-19 first wave. But when the case happened, people in the village vowed to not let anyone else test positive. Ten days before the Telangana government imposed a State-wide lockdown, the village with 1,150 residents had already decided to barricade itself.

No villager was allowed to move out of the village. Anyone not wearing a mask would be fined ₹1,000. Only activities related to agriculture and national job guarantee works are allowed in the village.

Twice a day, a team of warriors go around the village, making announcements on the Covid precautions. Laharika Maruthi, the 29-year-old sarpanch , took the lead, convening a meeting of various communities and discussing ways in which to keep off the virus. She impressed upon the leaders of various communities the need to enforce strict physical distancing.

All the borders to the village are well guarded. “We have set up temporary barricades and quiz those who come in. They are allowed only if they have a genuine reason,” says Maruthi.

With reports of new infections and Covid-related deaths coming in from neighbouring hamlets, Ragojipet’s village committee has started a door-to-door fever survey.

Blood samples are collected from anyone found to be feverish and sent for the RT-PCR test. Sattayya, a farmer with 10 acres, says most people are cooperating and thus they have been winning the battle against the virus.

At Edamalakkudy, 40 km from Munnar hill station, too, the village has barricaded itself from outsiders. The 800 families comprising 3,000 individuals living in 26 Kudis (tribal settlements) in the panchayat depend on Munnar town for all their essentials. Earlier, they would travel to Munnar in groups every week to procure groceries. However, since last year, following the decision of the Nattukuttam (decision-making local collective), the practice of travelling in groups was discontinued. Instead, one is deputed to make purchases for the entire hamlet. On return, that person would be quarantined for two weeks.

Maintaining social distancing A class in progress at Edamalakkudy, Kerala

According to S Premkrishnan, Sub Collector, Devikulam, Edamalakkudy is Covid-free mainly because of the small population and the travel restrictions imposed by the Nattukuttam. The village is quite strict about not entertaining any outsider and borders are monitored constantly. The Forest Department in Marayur has also stopped issuing passes to visitors.

Edamalakkudy’s success in warding off the virus has now inspired other tribal hamlets in the Marayur Forest Division area to follow its model.