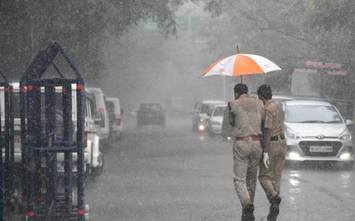 The strong cross-equatorial flows generated by the extremely severe cyclone ‘Tauktae’ will throw up a low-pressure area on Saturday, which is likely to intensify gradually into a cyclone in the Bay of Bengal, an India Meteorological Department (IMD) update said Wednesday afternoon.

This will also drag in the South-West monsoon over South Andaman Sea and adjoining South-East Bay ahead on Friday, its first pit-stop in the Indian territorial waters the same day of Bengal, in association with the likely strengthening and deepening of the south-westerly winds over the region.

Cyclone in Bay by Tuesday

The low-pressure area is expected to intensify into a tropical cyclone by Tuesday next, the IMD said. It is likely to move north-westwards and reach the West Bengal-Odisha coasts by Wednesday, according to preliminary indications. This is subject to change as the week progresses into the next.

If the cyclone sticks to the projected area of landfall, it will help massive rains to roar into Central India and adjoining Peninsula much before the monsoon reaches the mainland. This rare spectacle is currently on show over North-West India with a weakening ‘Tauktae’ triggering heavy to very heavy rain already.

Tropical cyclones forming one so soon after the other ahead of the onset of the monsoon is rare and reflects the overall strength of the current as the country prepares to receive the seasonal rains over the mainland at its gateway along the Kerala coast by May 31, as per IMD forecasts already available.

The IMD said that atmospheric and oceanic conditions such as convection and sea-surface temperatures remain favourable for persistent cloudiness over the Andaman Sea and the adjoining areas of East-Central and South-East Bay of Bengal for the formation of the low-pressure area.

Light to moderate rainfall has been forecast at most places over the Andaman and Nicobar Islands with heavy to very heavy falls at isolated places on Saturday and Sunday. The outlook for Odisha, West Bengal and adjoining Assam and Meghalaya predicted light to moderate rainfall with heavy falls from Tuesday. They will scale up significantly in spatial extension and intensity subsequently.

Squally winds with speed reaching 40-50 km/hr gusting to 60 km/hr are likely to prevail over South-East Bay and South Andaman Sea from Friday in association with the arrival of the monsoon.

Squally winds with speed reaching 45-55 km/hr gusting to 65 km/hr may prevail over the Andaman Sea and adjoining East-Central Bay on Sunday. They may ratchet up to 50-60 km/hr gusting to 70 km/hr from Sunday and become gale winds from Monday and Odisha, West Bengal, Bangladesh coasts later.