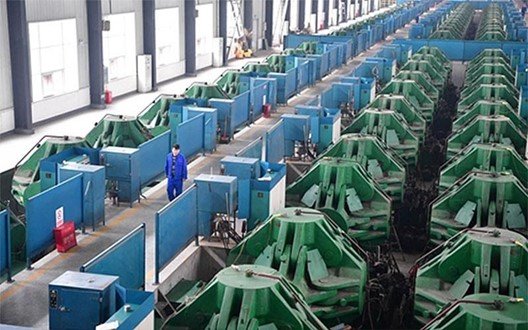 The International Gemological Institute (IGI) breaks down everything you need to know about lab-grown diamonds.

Are they real diamonds?
Yes. They are not simulants like CZ or moissanite. They are not “fakes.” Aside from subtle carbon distinctions they are chemically identical to natural diamonds. The technical difference is that they’re not billions of years old. They are grown in factories using sophisticated chemical synthesis over a period of 1-4 weeks.

Are they synthetic?
They are created through chemical synthesis. And while you may see the term synthetic-diamond in science journals and research papers the diamond industry widely uses the term lab-grown.

Do they look the same?
Yes. They have identical refractive index and optical qualities. They are even graded using the same color and clarity scale as natural diamonds. Experienced gemologists and jewelers may be able to identify characteristics which point to lab-grown origin, but in casual viewing they are identical to natural diamonds.

Are they less expensive?
Yes. Lab-grown diamonds trade for lower prices than comparable natural diamonds. And the principal of accelerating change suggests technology improvement may ultimately make them even more
cost-effective to produce.

Are they planet-friendly?
Yes. They are conflict free, produced by salaried workers in factory environments. They require no open-pit mining. No dredging of rivers or sea-beds. However, the energy required to produce them is immense. And natural diamond revenue sustains millions of the world’s poorest people. For jewelry professionals and consumers – it’s positive for our business, as a whole, that both lab-grown and natural diamonds have positive planetary value propositions.

HPHT
High Pressure, High Temperature (HPHT) replicates the natural conditions under which diamonds formed. Of course, they formed around 100 miles below the earth’s surface a billion years ago as continental drift dragged land masses across each other. The process employs anvils, heating and pressure apparatus applying significant pressure and heat to a small cell over a period of days or weeks.

The small cell contains a seed crystal, a metal catalyst and carbon powder. It will be heated to between 1300 and 1600 degrees Celsius. Note that the top of the cell will be heated a small percentage hotter than the bottom of the cell. This is to keep the melt happening from top down. 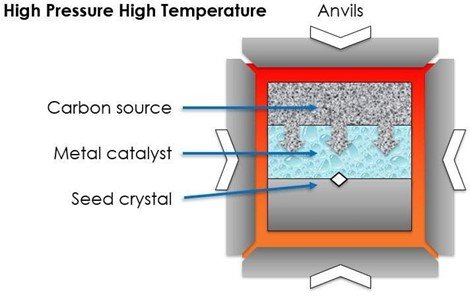 Anvils apply massive pressure from all sides (approaching 900,000 pounds per square inch). The HPHT process results in liquification of the catalyst, which starts dissolving the carbon. That melted carbon moves from the higher temperature to the lower temperature, migrating through the flux to the diamond seed crystal. Upon reaching the cooler seed, the carbon material crystallizes on it and the seed stimulates the growth of a new lab-grown diamond.

CVD
Chemical Vapor Deposition (CVD) occurs in a vacuum chamber. It begins with a flat substrate of diamond seed crystal. The chamber is depressurized and filled with hydrocarbon and hydrogen gases. Microwaves are used to heat those gases until the electrons separate from their nuclei, forming plasma. 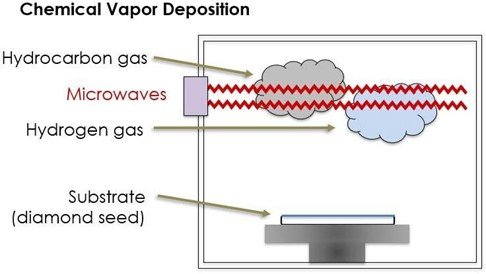 Hydrogen and carbon atoms precipitate from the superheated plasma cloud and rain down on the substrate. Under ordinary circumstances this process would only grow graphite, but the hydrogen atoms etch the graphite away, permitting the carbon atoms to pair with the diamond substrate, crystallizing atom by atom and growing vertically upward. 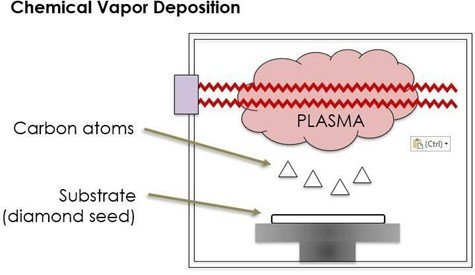 Growth Morphology
While lab-grown diamonds are chemically identical to natural diamonds the way they grow, physically, is somewhat different in HPHT’s cubo-octahedral growth and radically different with CVD’s cubic and vertical growth.

Metallic Flux in HPHT
One by-product of the HPHT process is the possibility of metallic inclusions. If you recall, a metallic catalyst is used to dissolve the carbon which migrates to the diamond seed. Logically, pieces of that metal catalyst which do not melt entirely can become trapped within the diamond crystal. 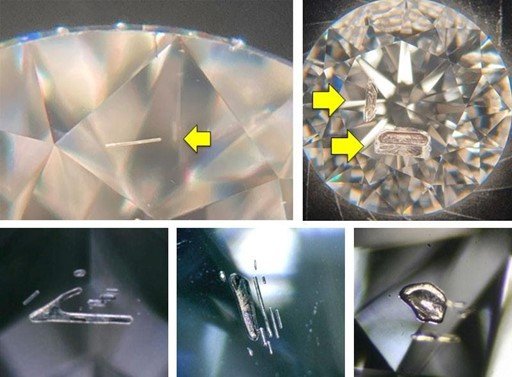 The most frequently seen characteristic in HPHT produced diamonds is a dark, rod-shaped metallic inclusion. These flux inclusions can have a man-made appearance when seen under magnification, and can even be reflective, unlike any naturally occurring inclusion type.

Stria and Planar Inclusions in CVD
Remember, there is no pressure applied. Carbon rains down on the substrate, growing that crystal vertically in parallel layers. During the process that crystal growth may undergo a series of stops and starts. In such cases you may see graining within the diamond which presents as extremely flat, since it took place on a single linear horizontal plane. 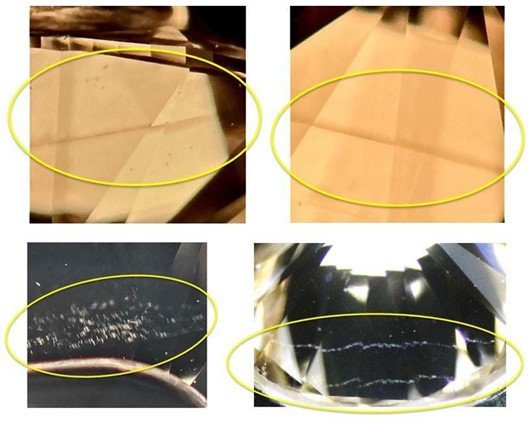 Another by-product of vertical growth, and a process which may have stops and starts or includes contaminants, are characteristics which become grouped together on a single linear plane within the finished crystal. Such structured planar inclusion groups rarely/never occur in natural gemstones.

Experienced diamond cutters, gemologists and jewelers are improving in their ability to identify certain lab-grown diamonds with loupes and microscopes.

Quality Control Factors
In the past several years the rising visibility and popularity of lab-grown diamonds has created a “lab-grown diamond rush.” As more and more growers enter the arena, lab-grown rough output has taken on more variability. This can be exaggerated by entities entering the field with less capital resources, lower quality equipment, presses converted from industrial to gem-quality use, contamination confounders, etc. Turnaround choices also play a role. When a growth process is pushed to maximum speed it will increases the grower’s output, but also increases the likelihood of inclusion types which experienced gemologists can identify as distinctive to lab-grown diamonds.

Interested in other tips, tools, and techniques aimed at helping you run a more secure and successful jewelry business? Browse more of our Business Tips.
Source