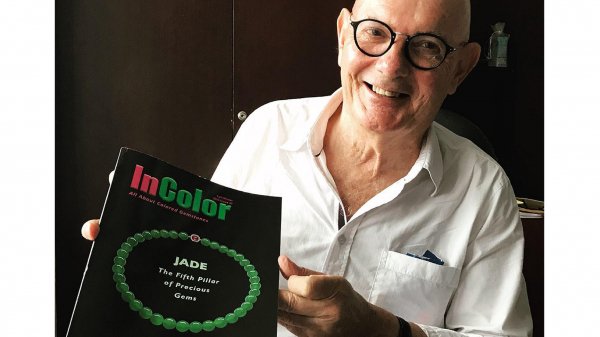 The longtime editor of ICA’s InColor magazine succumbed to COVID-19 on Monday.

Michelou had been active in the gemstone industry since 1977, working in gemstone trading, mining, and cutting, as well as serving as a sourcing strategist dealing with various countries.

The list of his positions and projects throughout his more than four decades in the industry is expansive.

He founded the International Colored Gemstone Association’s InColor magazine in 2004, serving as editor-in-chief up until recently, when he announced his retirement after 17 years of “incessant dedication” to the publication, ICA President Clement Sabbagh said on a post on ICA’s LinkedIn page.

He also served on ICA’s board of directors for 18 years, including 10 as its vice president, according to LinkedIn.

In 2017, Jean Claude and his daughter Zoe co-founded Imperial Colors Ltd., a business dedicated to rough buying, grading, and cutting of emeralds from Pakistan’s Swat Valley, tourmalines and beryls from Africa, and Sapphires from Sri Lanka.

He also served as a consultant for USAID, the World Bank, and various government agencies to help with the development of mine-to-market infrastructure and policies for the gemstone industry, and has worked on the development of trade and mining standards and social responsibility initiatives for artisanal and small-scale mining communities.

This included acting as a senior technical advisor for United Nations Interregional Crime and Justice Research Institute (UNICRI) on the gem and jewelry supply chain for its “Illicit Trafficking of Precious Metals and Traceability and Ethical Origins of Colored Gemstones” project and serving as a contributor to the Organisation for Economic Co-operation and Development forums on precious metal and gemstones.

He also served on the advisory board for the University of Delaware’s Gemstones and Sustainable Development Knowledge Hub and helped organize the World Emerald Symposium events.

In addition to his vast knowledge of, and passion for, colored stones, Jean Claude was also known for the time and attention he gave to other members of the trade.

Field gemologist Vincent Pardieu said he was not only a mentor to him but to many in the industry, noting the latter had a fondness for helping young people.

Many who shared their memories and condolences about his death on social media talked about him being a cheerleader for their work, guiding them in the right direction, pushing them to keep going, and offering honest opinions.

“JC, as he was known in our community, worked passionately and tirelessly throughout his life to support the colored gemstone industry,” ICA’s Sabbagh said on LinkedIn.

“JC will be lovingly remembered by relatives and the many friends he had around the globe. He will be sadly missed by all of us at the ICA.”
Source