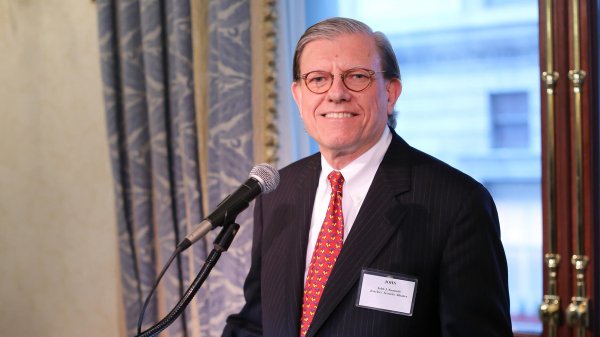 He’s been with the Jewelers’ Security Alliance for nearly 30 years, dedicating himself to the safety of the industry.

Jewelers’ Security Alliance President John Kennedy will be honored with the Gem Award for Lifetime Achievement this summer. New York—This year’s recipient of the Gem Award for Lifetime Achievement is none other than Jewelers’ Security Alliance President John Kennedy.    JA and the Gem Awards committee chose the longtime head of JSA as the 2021 Lifetime Achievement Award honoree for his commitment to the health and safety of the industry, JA said.    An attorney by trade, Kennedy became president of JSA in January 1992.    Prior to that, he served as assistant commissioner and deputy general counsel of the New York City Department of Investigation and as assistant counsel of the New York State Commission of Investigation.    He’s the coauthor of JSA’s Manual of Jewelry Security and also has served as secretary of the 24 Karat Club of the City of New York since 2002.   Kennedy received the 2021 Stanley Schechter Award from the Jewelers Vigilance Committee earlier this year in recognition of “his tireless dedication, hard work and support of JVC’s mission to maintain ethics and integrity through legal compliance.”   Founded in 1883, JSA currently has 20,000 member locations.    The organization works closely with the FBI and police departments throughout the United States to help members avoid burglaries, robberies, and thefts.    “I have known John Kennedy for 23 years, and there is no one more deserving of receiving the Gem Award for Lifetime Achievement than him,” said JA President and CEO David J. Bonaparte.    “He has made a positive impact for retailers and manufacturers and continues to strive to make the industry a safe place for all. While security is John’s main focus, he has truly established himself as a key resource and an industry leader for others to rely on. John is a true Gem and is the essence of what makes our industry so special.” As previously announced, the 19th annual Gem Awards will be virtual this year. It is scheduled to take place on Thursday, July 15.
The Gem Awards honors the outstanding achievements of individuals or companies whose work raises the visibility and status of fine jewelry and watches.   Registration is now open for the complimentary event.     In addition to honoring Kennedy and the other winners—whose names will be announced soon, JA said—the 2021 Gem Awards will pay tribute to the life and legacy of Elsa Peretti, who died in March at the age of 80, and the strength of the industry over the past year.    Prior to the presentation of the awards, event sponsors will treat guests to drinks in private digital “circles” for a personalized Gem Awards cocktail hour, allowing them to connect and network in the spirit of the event’s usual cocktail hour.    For details, to register, or to support John Kennedy through sponsorships and the Gem Awards Journal, visit GemAwards.Jewelers.org.
Source