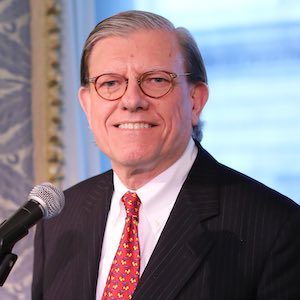 Jewelers of America (JA) has announced that John J. Kennedy (pictured), longtime president of the Jewelers’ Security Alliance (JSA), will receive its GEM Award for Lifetime Achievement at its annual award ceremony this summer.

The 19th annual GEM Awards will take place as a free virtual event on July 15. The awards gala generally takes place in New York City during January, but it was postponed this year because of COVID-19.

A lawyer, Kennedy has been president of the JSA, the industry’s premier crime-fighting group, since January 1992. Prior to joining the 138-year-old JSA, Kennedy served as assistant commissioner and deputy general counsel of the New York City Department of Investigation, and as assistant counsel of the New York State Commission of Investigation. He is the coauthor of JSA’s Manual of Jewelry Security and has served as secretary of the 24 Karat Club of the City of New York since 2002.

Kennedy talked about his career at the JSA on the JCK podcast The Jewelry District last year.

JA will be announcing the other GEM Award nominees soon. The awards ceremony will include a tribute to Elsa Peretti, the famed Tiffany & Co. designer who died in March.

“I have known John Kennedy for 23 years, and there is no one more deserving of receiving the GEM Award for Lifetime Achievement than him,” said JA president and CEO David J. Bonaparte in a statement. “John has been dedicated to improving the industry in every way, not only in all matters of security but in the spirit of improvement for business success in all facets of the industry. He has made a positive impact for retailers and manufacturers and continues to strive to make the industry a safe place for all.”

To register to attend the event, go to gemawards.jewelers.org.

(Photo courtesy of Jewelers of America)