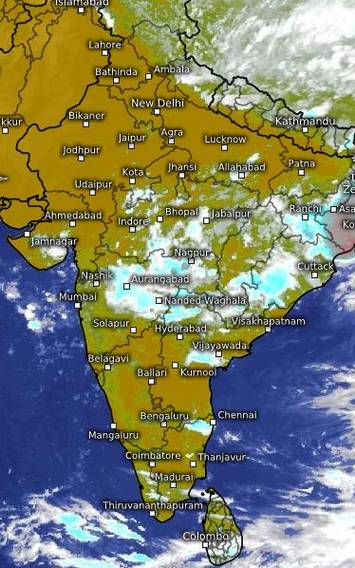 IMD maintains a watch in the Bay of Bengal

The first monsoon low-pressure area forming over the North Bay of Bengal and neighbourhood by Friday may strengthen the south-westerly winds over the Arabian Sea and may result in its rapid advancement from Thursday, India Meteorological Department (IMD) said on Monday evening.

The monsoon is expected to advance into the remaining parts of Maharashtra (including Mumbai), Telangana and Andhra Pradesh by Friday; Odisha, West Bengal, Chhattisgarh, Jharkhand, Bihar, East Uttar Pradesh, and some parts of Madhya Pradesh and Gujarat by the end of the week, the IMD added.

The monsoon has already reached the North-Eastern States. Fairly widespread to widespread rainfall is predicted over most parts of East India and adjoining Central India from Thursday. Isolated heavy to hefty rain is likely over Odisha and the plains of West Bengal on both Thursday and Friday.

A similar outlook is valid for Jharkhand on Friday and for East Madhya Pradesh, Vidarbha and Chhattisgarh on Friday and Saturday. Isolated extremely heavy falls are forecast over Odisha on these days. Rains may rev up also along the West coast and adjoining Peninsular India, including Maharashtra, from Thursday.

Updated IMD outlook came on a Monday, the fifth day since onset when the monsoon appeared to be waiting for the ‘nod’ from the Bay of Bengal in the form of the anticipated low-pressure area before it could hope to power up the proceedings along the West Coast and the North-Eastern States.

The monsoon remained mostly muted yesterday (Sunday), and satellite pictures this (Monday) morning showed the West Coast devoid of any clouds except in the North Konkan area. Sparse clouds were spotted over the South-East Arabian Sea halfway en route to the Maldives but of no immediate help.

In contrast, the encouraging build-up is being noticed to the other side of the peninsula over the South-West and South-East Bay of Bengal in anticipation of the first low-pressure area of the season.

Madhusoodanan MS, Professor & Director at Noida-based Amity Institute of Global Warming & Ecological Studies, told BusinessLine that the monsoon had ‘gone indifferent’ after the onset was declared on June 3.

He finds a drastic mismatch in the pressure and temperature gradients on this side of the Equator, which the monsoon needs as a precondition to charge its way up in the form of cross-equatorial flows. Madhusoodanan blamed this on the early and abnormal warming of the South-East Arabian Sea.