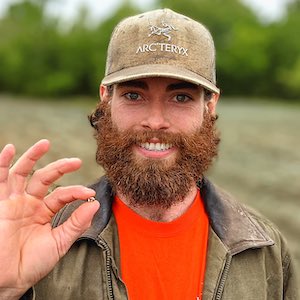 Usually, when someone finds a significant diamond at the Crater of Diamonds State Park in Murfreesboro, Ark., they aren’t sure what to do with it.

But dedicated searcher Christian Liden (pictured) has a clear idea: He wants to use it for his engagement ring.

The 26-year-old, who lives in Poulsbo, Wash., has been on a nationwide trek with a friend to different mine sites, using homebuilt mining equipment. First, they tested their tools at a Montana sapphire mine. But the big test was when they arrived at the Crater of Diamonds.

The Crater of Diamonds is the world’s only public park that lets visitors search for diamonds and keep what they find. And while most visitors go home empty-handed, the park has been the site of some pretty spectacular finds.

Liden arrived at the park on May 7 and “spent about an hour in the field that afternoon, and returned early the next morning to mine all day,” he said in a statement.

On his third day, his hard work paid off when he saw something in the mud.

“I saw it shining as soon as I turned the screen over and immediately knew it was a diamond. I was shaking so bad, I asked my buddy to grab it out of the gravel for me.”

At the park’s discovery center, staff confirmed that Liden had indeed found a 2.2 ct. yellow diamond. It’s the largest find at the park in seven months.

“I was just hoping to find a couple smaller stones [at the park] and had planned to buy a center stone later,” he said. “That won’t be needed now.”

Still, he isn’t done: He hopes to go opal mining in Nevada and pick up a few side stones.

“Mr. Liden’s diamond is light yellow, with a triangular shape and a sparkling, metallic luster,” ​said park assistant superintendent Dru Edmonds in the same statement. “Like most diamonds from the park, it contains a few inclusions, making it one of a kind.”

Edmonds added: “Since the eighth grade, Mr. Liden has dreamed of creating a special ring for his future wife, with stones and gold he mined himself. And now he can make that dream come true.”

Liden has named his diamond the Washington Sunshine, “because it’s got a nice, light yellow color, just like sunlight in Washington.”

(Photo courtesy of the Crater of Diamonds State Park)