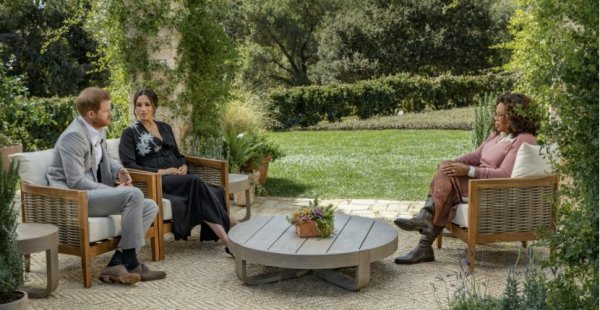 She wears several pieces with a clear message

March 7, 2021—There has been a lot of ink and tea spilled recently about the relationship between the Sussexes of Montecito and the Windsors of the United Kingdom in advance of the Oprah two-hour interview airing tonight at 8pm eastern on CBS.

The situation has exploded into a major family battle and power struggle which I expect will only get worse after it airs. It is hard to know what is true and what isn’t overall, but when it comes to jewelry there is some very clear messaging coming out of California.

I am going to focus on the jewelry since it is in fact my territory. To try and keep the jewelry notes balanced, and give the other side of the story in the battle royale, I listed the details coming out of London on the controversial diamond earrings at the end. 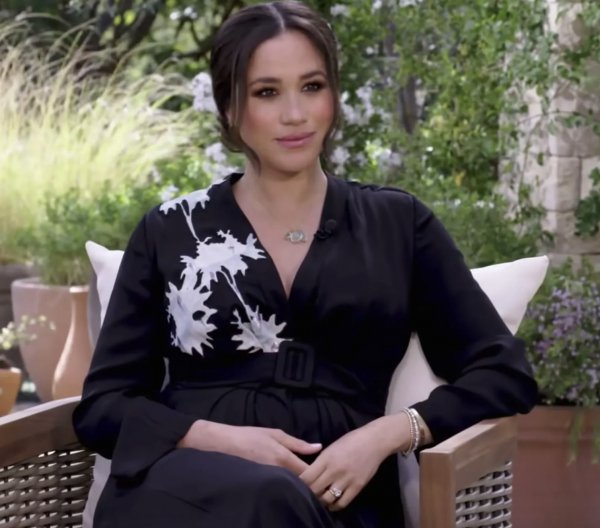 Eagle-eyed royal watchers spotted this jewel when the preview of the interview aired. Any Diana jewel worn by Meghan or Kate always lights up the internet.

In this context many believe Meghan’s choice of this jewel is echoing Harry’s statement seen in the previews for the Oprah interview, “My biggest concern was history repeating itself.” The phrase has been interpreted to mean they felt in danger from the constant press intrusions as well as feeling upset by their treatment from the royal family.

Not much is publicly known about Diana’s tennis bracelet. It could have been a gift or she could have bought it for herself. All the photos I have seen of her wearing the jewel date from after Diana and Charles divorced in 1996. 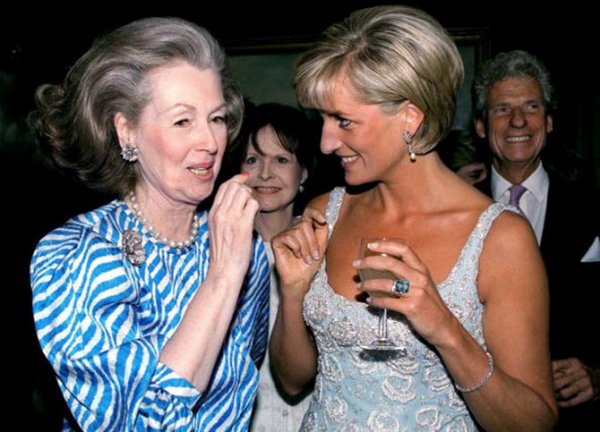 At the time Diana did buy herself some jewels including the aquamarine Asprey ring Harry gave Meghan as a wedding gift. Diana often wore the two jewels together so it is tempting to think she also bought herself the tennis bracelet.

The piece has become sentimental for Harry and Meghan. Reportedly, the two side stones in Meghan’s engagement ring were extracted from the bracelet. If this is true, I assume the bracelet was resized so there are not holes in it but I can’t confirm. It would seem beside the point to replace the diamonds. 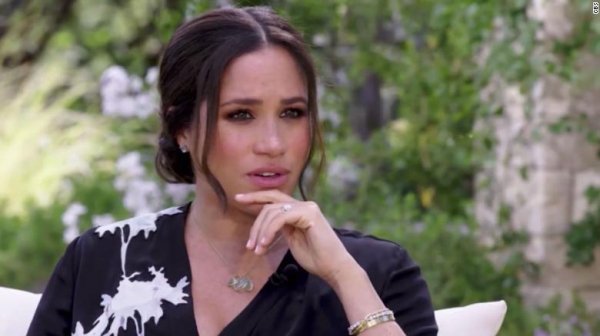 Like countless women around the world, Meghan has a Cartier Love bracelet she has worn regularly for years. Clearly, she is telegraphing some positivity for the interview, or trying to anyway, with the message of the design. It is believed the iconic jewel was a gift from Harry in the early days of their relationship.

Meghan appears to be wearing a smaller diamond tennis bracelet. I believe she has worn this bracelet previously. If it is the same jewel I’ve seen in the past, it has been misidentified as Cartier. Prince Charles did apparently give Meghan a Cartier diamond bracelet but this delicate one is most likely not the jewel from the famous French house. 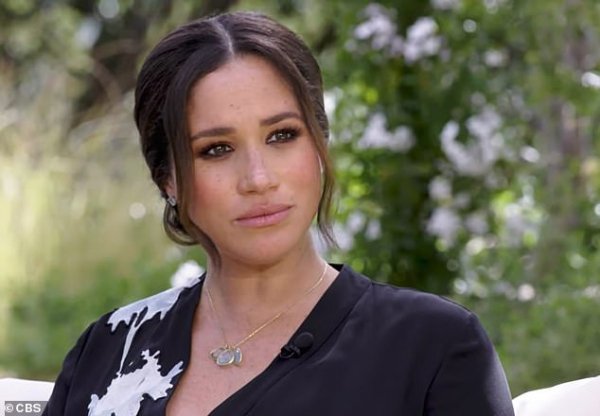 Meghan’s most prominent jewel in the interview is her Pippa Small 18K Gold Aquamarine Triple Colette Set Pendant on a Cord. She has worn jewels by the London based designer any number of times. Clearly, Pippa’s handmade earthy aesthetic appeals to Meghan. I am sure, however, there is more meaning to her support of the label.

Pippa was a pioneer in sustainable jewelry and she has traveled the world educating craftsmen. Her journeys include war torn regions like Kabul, Afghanistan and Myanmar where she has helped revive traditional jewelry making in training programs. In 2013, Pippa was named ambassador of the human rights organization Survival International and awarded an MBE by the Queen.

When Meghan filmed Suits in Canada she shopped for jewelry at Birks. For the Oprah interview she wears a pair of White Quartz and Silver earrings from the jeweler. There are many other stud earrings in Meghan’s collection that she could have worn. I feel like she always returns to her Birks pieces because they represent a happy moment in her life. 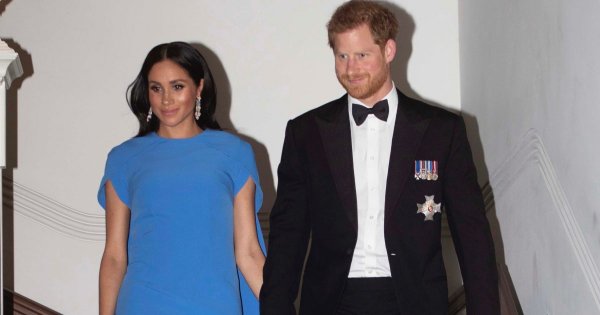 The Earring Controversy from London

According to a story published earlier this week in the The Times of London, anonymous sources who once worked for Harry and Meghan at Kensington Palace claim they were difficult and really took a swipe at their sense of judgement in regard to a pair of earrings that were a wedding gift from the Saudi crown prince Mohammed bin Salman.

Meghan wore the long diamond pendant earrings during an official visit to Fiji three weeks after the prince sanctioned the murder of the journalist Jamal Khashoggi.

When Meghan wore the jewels the official release said they were “borrowed.” At the time I wrote “Generally speaking, when the women in the family wear something “borrowed” it comes from Queen Elizabeth’s collection. These jewels, however, feel more contemporary than most of the pieces her Majesty owns.” 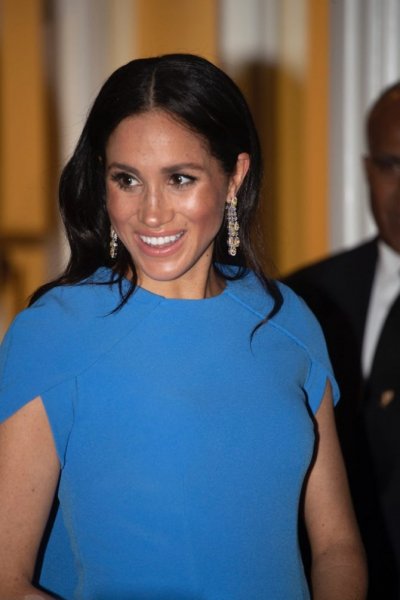 Well, now we know they were not “borrowed” at all even though both Kensington Palace and Meghan said they were.

Lawyers for the couple seem to be claiming Meghan was unaware of the rumors about the crown prince’s involvement in the murder when she wore the earrings. I’ll admit that is a pretty tough fact to swallow considering the blanket international coverage of the story. To make matters more complicated she wore the earrings a second time months after the Fiji trip.

What I will say is the couple must have felt the gift giver would have been kept under wraps and were obviously betrayed by the staff. Meghan was clearly enchanted by the designs and I believe looking past the crown prince at the beauty of the jewels.