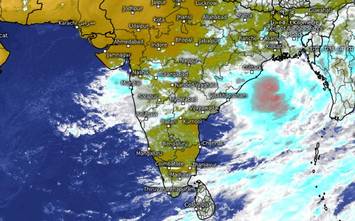 Mumbai and its surrounding areas were lashed by strong monsoon winds on Wednesday, even as a cyclonic circulation formed over the Bay of Bengal as a harbinger to an anticipated low-pressure area.

Mumbai and its surrounding areas were lashed by strong monsoon winds on Wednesday, even as a cyclonic circulation formed over the Bay of Bengal as a harbinger to an anticipated low-pressure area.

Races past Mumbai, most parts of Maharashtra

The monsoon is bracing to shift gear and enter what looks like the busiest session since onset after India Meteorological Department (IMD) on Wednesday located a cyclonic circulation, precursor to a pivotal low-pressure area, over East-Central and adjoining North-East Bay of Bengal.

It would intensify a round into being ‘well-marked,’ and may travel in a West-North-West track thought to be most ideal in terms of spreading its bounty to the maximum area possible as it crosses North Odisha coast and enters Jharkhand and North Chhattisgarh over the three subsequent days.

Any track linking the Odisha coast and further into the farming heartland would also assure good rain farther away for the West Coast and parts of the South Peninsula, Mrutunjay Mohapatra, Director-General, IMD, had told Chennai-based weather bloggers in a chat held the other day.

On Wednesday, the monsoon entered entire Konkan including Mumbai and most parts of interior Maharashtra; some parts of South Gujarat region; more parts of Telangana and Andhra Pradesh. Its northern limit passed through Bulsar, Malegaon, Nagpur, Bhadrachalam, Tuni, and Bagdogra.

In a separate warning, the IMD warned that ahead of the monsoon onset, thunderstorms may roll out in their hordes marked by cloud-to-ground (lightning) strikes across Madhya Pradesh, Uttar Pradesh, Vidarbha, Chhattisgarh, Odisha, Bengal, Jharkhand and Bihar during the next 2-3 days.

The IMD has forecast fairly widespread to widespread rain and isolated to scattered heavy to very heavy falls very likely over most parts of East India and adjoining Central India from Thursday. Isolated extremely heavy falls (≥ 20 cm) is likely over Odisha on Friday and Saturday.