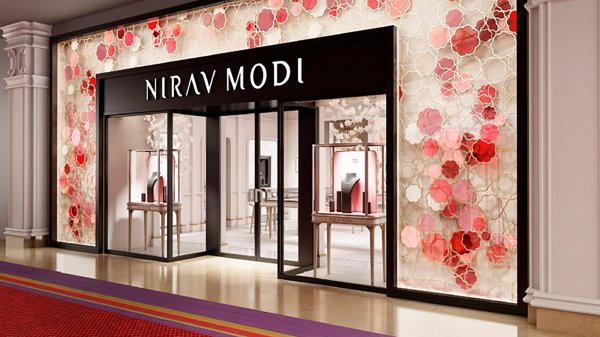 A docuseries on the streaming service shines a light on the human cost of the diamantaire’s financial scandals.

A rendering of the Nirav Modi store at Wynn Las Vegas. An episode of Netflix’s “Bad Boy Billionaires: India” focuses on the rise and fall of the Indian diamantaire. When your boss asks if you want to watch Netflix during your workday, say yes.

That’s how I found myself on my couch under a fuzzy blanket in the middle of a Wednesday afternoon watching “Bad Boy Billionaires: India.”

It’s a four-part investigative docuseries that explores the lives of Indian billionaires who have fallen from grace, including diamantaire Nirav Modi.

The show premiered on Netflix in fall 2020, but not without a fight.

The streaming giant faced a legal battle regarding the series’ release, but an Indian court eventually allowed all but one of the episodes to be aired.

(An episode on B. Ramalinga Raju, the founder of a software company, is the one that’s still in legal limbo and is not available.)

Nirav Modi is the focus of the second episode, which opens with a bustling scene in Surat, India, the city that produces nearly 90 percent of all polished diamonds.

It reminds me of New York City’s Diamond District and there are a few parallels, from its tight-knit community to its strong code of honor.

The episode rewinds to the start of Modi’s career, which began when he apprenticed with his uncle, Mehul Choksi, a shady character in his own right who’s wanted in India and was recently captured in the Caribbean.

Kirti Shah, a diamond merchant in Surat, explains how the industry is built on an honor system, and how quickly a jeweler will be shunned if that trust is broken.

The show then follows Modi through the founding of Firestar Diamond in 1999. Its factory employed between 1,800 and 2,000 people.

Two women who worked in the factory described Modi as friendly and warm, despite his position of power. They said they enjoyed their jobs and the benefits it provided, like medical care.

Though Modi got his start on the polishing side of the industry, he knew there were higher margins on the retail side and set out to build a luxury brand.

If Germany is synonymous with expensive cars and Italy with luxury fashion, why can’t there be a high-end Indian jewelry brand?, he is said to have asked a friend.

So far, so good. He seems like a nice guy with a lot of ambition. Nothing wrong with that, right? Well … you’ll see.

In his quest for greatness, Modi pours over auction catalogs from Christie’s, Sotheby’s, and the like, learning what’s selling and for how much. He takes note of which pieces make the cover and sets out to make his own.

The results are astonishing.

Modi picks out a 12.29-carat pear-shaped diamond from the Golconda mine in India, which produces the “Rolls-Royce” of diamonds, said author Pavan Lall, who appears in the episode.

He crafts this fantastic pink and white diamond necklace in a breathtaking lattice pattern. It sold at Christie’s in November 2010 for $3 million, bought by a Taiwanese industrialist.

The piece made the cover of the auction catalog, fulfilling one of Modi’s dreams and marking the first time an Indian jeweler is featured there.

By now, Modi is starting to build up his brand, throwing lavish parties and hiring well-known models, like Rosie Huntington-Whiteley, to star in his campaigns.

Modi also starts opening stores all over the world, one after the other, in New York, Hong Kong, London, Macau, Beijing, Singapore and Hawaii. He plans to have 100 stores by 2025, a lofty goal indeed.

Many viewers might be rooting for Modi at this point, but those who know the story well know it’s about to take a deeply disappointing turn.

At this point, as a financial journalist by training I’m wondering, “Where is this guy getting all the money to do this?”

I’ll spare you the technical jargon, as financial journalist Samanth Subramanian gives a simple explanation of how the scam worked.

Modi took a series of loans from the Punjab National Bank starting in 2011.

“To get these loans, he used a uniquely Indian financial instrument called a letter of undertaking,” explains Subramanian in the show.

Basically, it’s credit a bank gives you so you can get credit in a foreign country. It’s a way to raise funds in dollars and pounds and skip the hefty conversion fees.

This isn’t anything shady just yet. In fact, Manoj Kharat, a clerk at the bank who was arrested in connection to the scandal, said he saw about seven to eight of these letters a day.

The catch is that you’re supposed to provide collateral to the bank, a percentage of the amount of money that you’ve borrowed.

Modi skipped this step by allegedly bribing officials at the bank.

But when the old guard retires and new officials step in, the house of cards comes tumbling down.

When Modi’s representatives head to the bank for more money, the new guys ask them for collateral.

When the representatives tell the bank employees that they’ve never had to provide collateral before, the bank officials go digging into the files. Nirav Modi has scammed the bank out of $1.8 billion.

In addition to the bank scandal, Modi is accused of inflating the prices of diamonds, upping the prices by selling the same diamond again and again to his various shell companies.

The scandal reminded me just how many aspects of the jewelry industry, from the supplier to the consumer, are based on trust.

The episode then details Modi’s downfall from that point on, from his fleeing the country to his arrest in London a year later. He remains in London, where he’s fighting extradition to India.

Perhaps by the end of the episode, I should have felt satisfied that Modi was found and may be brought to justice, but all I felt was sad.

He is undeniably talented and had the potential to build something wonderful in a legitimate way, and it all went down the drain.

There was greed at play, yes, but I got the sense that the money was secondary, a sentiment echoed by a few commentators.

What Modi really wanted was to be great and to build something memorable, a goal so many of us share. But there is such a thing as wanting something too much.

“You can’t distract a man like that. He had a purpose,” said Verma, the brand’s advertising director. “I felt that purpose was bigger than profit.”

Listening to Verma’s words of admiration, I grieved less for Modi and more for the people hurt in the process.

Verma expressed such a sense of pride in the company. To be a part of the rise of the first major luxury Indian jewelry brand and then to see it go under, and in such a scandalous way, must have been devastating.

“As the company would grow, the perception of India would grow,” he said. It was a matter of national pride.

Verma really seems to admire Modi, even now, and sees a comeback in the future, a belief the factory workers echo later on.

Another employee, Jeff Kantra, was beaming when he spoke about seeing designs he contributed to in the pages of Vogue and Vanity Fair, or seeing stars wear them while walking down the red carpet.

Kantra upended his life to head to Mumbai and help Modi fulfill his dream, and he was left in the dust, hearing the news of the scandal at the same time as the rest of us.

“I never experienced a moment where I questioned his integrity,” said Kantra.

The factory workers, Karuna Ingle and Suman Parmeshwar, spoke about how quickly their lives changed. In just one day, they were out of work and lost the support system that job provided.

Ingle said she didn’t leave the house for a month after she lost her job.

The women said they never expected Modi, a man they admired and spoke highly of, to take the money and run and leave them with no way to provide for themselves and their children.

They didn’t think he was that kind of person.

Their looks of betrayal are almost as painful as their looks of hope that Modi may return to restart the factory and give them their livelihood back.

This wasn’t a one-man show. There were hardworking people behind the scenes helping to build Modi’s vision, one they believed in too, and they were left behind.

While his factory workers worried about feeding their children in India, Modi was hiding out in a penthouse in London’s West End neighborhood.

As with most financial scandals, it’s the average people, you and me, who will pay for these crimes.

Punjab National Bank is a state bank, and so the state will have to step in to help. And by the state, we mean the taxpayers.

Instead of that money going to schools or infrastructure, it will be used to bail out the bank.

“He’s become the symbol of corrupt India. It is now a matter of national pride to see him in jail,” said fashion writer Namrata Zakaria.

I’ll be keeping an eye on how this case plays out, just as soon as I finish the whole series.