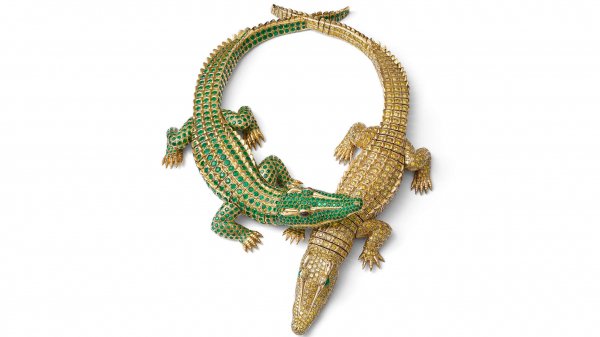 Editor-in-Chief Michelle Graff is eager to get out. Her first stop: the new jewelry exhibition at the American Museum of Natural History.

María Félix’s famous crocodile necklace by Cartier is crafted in gold with emeralds, yellow diamonds, and rubies for the eyes. It is one of the more than 100 jewels on display as part of the “Beautiful Creatures” exhibition at the American Museum of Natural History in New York. (Credit: Nils Herrmann, Cartier Collection © Cartier) Last Friday, I took a subway ride up to the American Museum of Natural History, where Marion Fasel has been spending most of her time.

The jewelry author and historian curated an exhibition of animal jewelry for the museum called “Beautiful Creatures.”

As writers do, she penned an accompanying book of the same name, which I recommend to jewelry lovers, particularly jewelry lovers who are also animal lovers.

“Beautiful Creatures” is housed in a rotating exhibition space adjacent to the museum’s just-renovated gem halls, which will reopen to the public next weekend after several years of construction and COVID-related delays.

Marion, who’s basically a walking encyclopedia of jewelry history, gave me a personal tour of the exhibition, and it was wonderful.

It was wonderful to get dressed, to leave my apartment for hours at a time, to take the subway somewhere with purpose, to catch up with one of my favorite colleagues, and to talk jewelry (and other things) in person again.

For me, it’s the people who make this industry enjoyable and I’ve missed you.

Over the next couple of weeks, I’m planning to bring you more stories of being “Out & About,” and I look forward to reuniting with some of you at the Vegas shows later this summer.

In the meantime, enjoy this verbal and visual tour of “Beautiful Creatures.”

A Splashy Opening
The exhibition is divided into categories based on where the featured creatures mostly dwell: Creatures of Air, Creatures of Land and Creatures of Water.

There are no barnyard animals, no household pets and no jewels that include animal forms as an afterthought, Marion told me at the start of my tour. All the pieces depict creatures in their entirety.

In curating the collection, Marion found inspiration within the walls of the museum—the Hall of Biodiversity was particularly inspiring, she said—and narrowed her search for jewels to the last 150 years, a nod to the museum’s recent milestone.

The American Museum of Natural History celebrated its 150th anniversary in 2019.

“Beautiful Creatures” opens with a case containing Creatures of Water, and Marion was at the ready to share the history behind each piece.

There’s a moonstone jellyfish brooch Jean Schlumberger made for dear friend and client Bunny Mellon after she was stung by one, a modern opal Man O’ War brooch crafted by Paula Crevoshay, two of Fulco di Verdura’s Lion’s Paw Shell brooches, and one of the four Boivin amethyst and ruby starfish brooches known to exist. 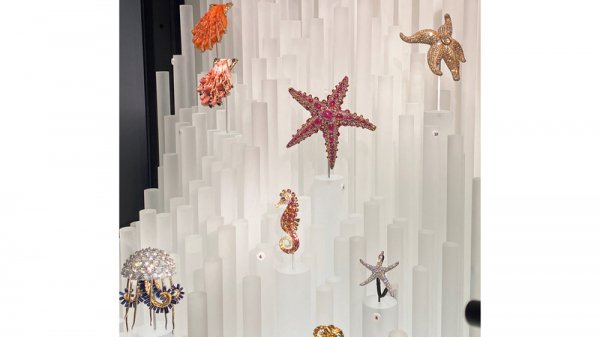 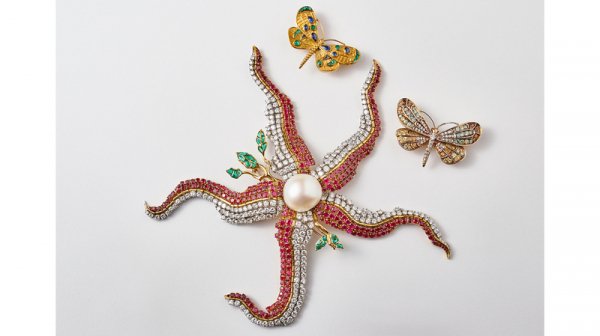 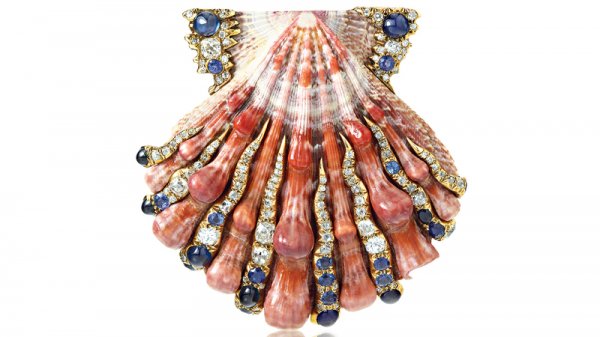 The piece to see in this case is the “Étoile de Mer” ruby, diamond and pearl brooch by Salvador Dalí, purchased by his friend and jewelry client Rebekah Harkness.

A year ago, very few people would have recognized that name but then quarantine hit, and a singer with a name everybody knows, Taylor Swift, wrote a song about Harkness and her Rhode Island mansion, which the singer now owns.

According to Swift, Harkness blew through her money “on the boys and the ballet, and losing on card game bets with Dalí.”

The Standard Oil heiress also reportedly spent a significant amount of money buying the Spanish artist’s rare jewels, including the “Étoile de Mer” brooch, and apparently had fun wearing them.

Images of Harkness wearing the brooch, which has fully flexible arms and comes with two butterflies that can be attached to its arms (Dalí was a surrealist, remember), show it draped over her shoulder.

María Félix’s Flair
I don’t know much about María Félix, but I do know this: She was not a woman who went for understated jewelry.

Several jewels that once belonged to the Mexican singer and actress, who starred in nearly 50 films between 1943 and 1970, are featured in “Beautiful Creatures.”

There is an incredible, 22-inch long, fully flexible snake covered in 2,473 brilliant and baguette-cut diamonds that, Marion noted, has an edgy look for Cartier.

There are a pair of gold and enamel snake ear clips, also by Cartier, so large I thought they were a matching set of bangles at first glance. 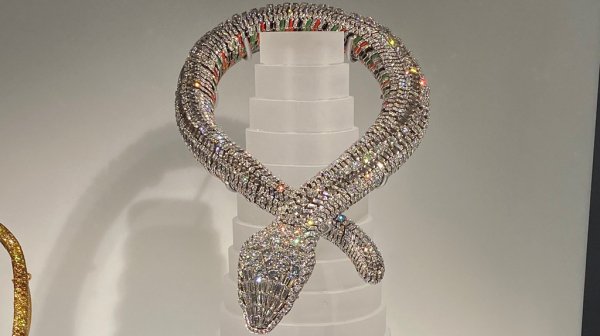 And then there is her famous yellow diamond and emerald crocodile necklace (pictured at top of article).

As the story goes, in 1975, Félix brought two live baby crocs into the Cartier store on Rue de la Paix in Paris to serve as “inspiration” for the designers and, according to Marion’s book, to let them know she was serious about wanting a crocodile jewel.

The legs can be removed as well in case you’re looking for a little something more demure, which Félix definitely was not.

The Case for Bugs
One of the Air cases in the exhibition is filled with insects, and I love it.

Insect accessories were extremely popular in the late 19th century, due in part to the opening of museums like the American Museum of Natural History, which was founded in 1869, Marion explained. 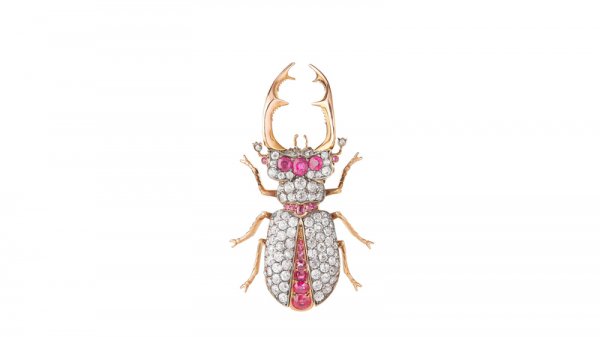 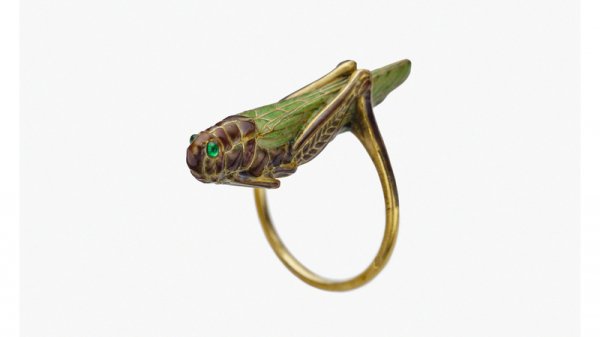 These museums opened people’s eyes to the diversity of the natural world. They wanted to express their newfound interest and appreciation through jewelry, and the jewelers of that time obliged.

There is a fly and a bee by Tiffany & Co., a stag beetle and a cicada from Boucheron, a Van Cleef & Arpels wasp, a Lucien Gaillard grasshopper, and a pin by Tiffany that one of the museum’s entomologist identified as a leaf weevil.
Our Favorites
Most of the time, when you ask a creator to pick a favorite among their works, they tell you they couldn’t possibly, that it would be like selecting a favorite child.

Marion, however, doesn’t have this hang-up with the exhibition she’s spent the last three years curating.

She willingly shared that her favorite section is the display of butterfly jewels artfully displayed along the back wall of the exhibition.

The collection of butterfly jewels in “Beautiful Creatures” highlights the individual artistry designers bring to the pieces they create, Marion said, and it showcases how styles, interpretations and use of materials change over time. 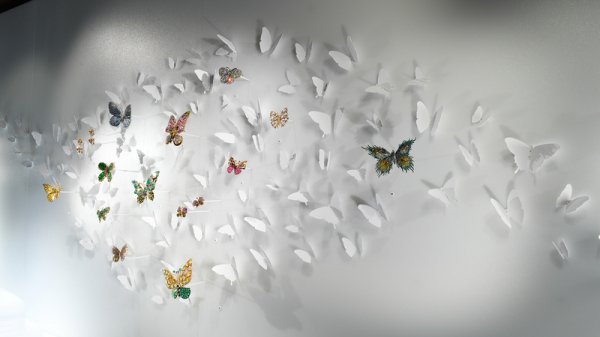 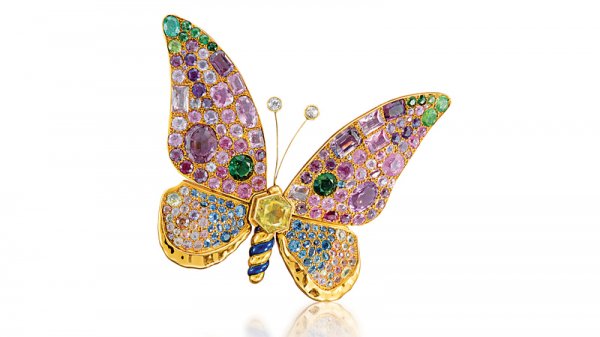 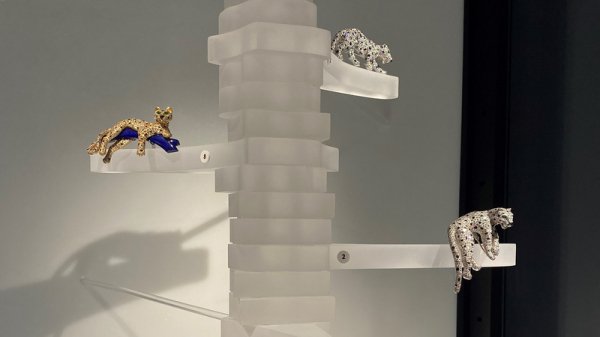 As a cat lover and owner, my instinct should be to select a piece from the final case we perused during my tour, a collection of land mammals that includes a few Cartier panthers as well as a Van Cleef & Arpels lion brooch that belonged to Brooke Astor and a lion shoulder brooch by Boivin.

But I have to say my top jewel overall is the grasshopper ring by Lucien Gaillard, a gold, enamel and cabochon emerald piece from 1900 just because it’s so unexpected.

“Beautiful Creatures” is located within the new Allison and Roberto Mignone Halls of Gems and Minerals at the American Museum of Natural History. It is on display through Sept. 19 in the Melissa and Keith Meister Gallery, the museum’s first space for rotating exhibitions within one of its permanent halls.

The just-renovated gem halls officially reopen to the public on Saturday, June 12.