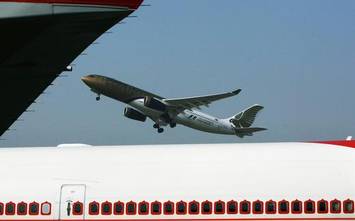 ‘With Covid on the rise, recovery will be delayed by 6 months’

International and domestic passenger traffic have decreased by 84.8 per cent and 61.7 per cent, respectively, during FY21 compared to the previous fiscal.

This has resulted in an overall decrease of 66.2 per cent in total passenger traffic during the period, according to data released by the Airports Authority of India (AAI).

While traffic in and out of cities including Puducherry, Bhatinda, Pithorgarh, Khajuraho and Shimla were practically wiped out, smaller ones such as Kalaburagi, Pakyong Hindon and Hissar reported growth in air passenger tarffic.

International and domestic freight traffic has shown a decline of 24. per cent and 28.1 per cent, respectively, resulting in overall decrease of 25.7 per cent in the total freight traffic.

Analysts said that the data confirmed that the Indian aviation industry is staring at dark clouds as Covid-19 cases are rising in India.

Aviation experts have said that recovery will be delayed by six months and will be slower than forecasted (for FY22).

To top that, higher fuel prices, lower yields and excessive competition are likely to pose as headwinds for the airlines industry.

So far, at least 15 countries have banned flights to and from India amid rising cases, while others have issued fresh travel norms for Indians. Closer home, several States have imposed stringent rules amid rising cases.

In light of this, India Ratings and Research has said that the recovery in domestic and international travel has been delayed by three and six months, respectively, whereas, Centrum Broking Limited has corrected its forecast of recovery.

Ashish Shah-Sr. Research Analyst-Centrum Broking Limited said that “the industry recovery forecast is likely to reach only 75 per cent of pre-Covid levels in FY22 from 85 per cent earlier recovery of the airlines industry will be delayed by at least six months.”

Additionally, according to India Ratings, 2021 has brought to the fore three new challenges to contend with; higher fuel expenses, rising competition and the flight for market share.