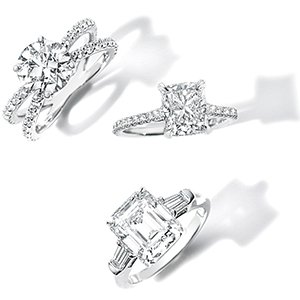 It’s not just the lab-grown versus natural diamond wars. A new industry tiff is opening, with platinum taking on white gold.

Platinum Guild International (PGI) recently commissioned a study to test the durability and wearability of alloys made of white gold compared to those made of platinum—and crowed afterward that platinum came on top for both.

The resulting paper, Wear Resistance of Platinum and Gold Alloys: A Comparative Study, found the following:

• In abrasion tests—mimicking both hard (rough wear) and soft (light wear) abrasion—gold lost metal weight, while platinum did not.

• In corrosion tests, the white gold specimens showed a major change in color, while platinum showed little to no corrosion.

The paper also found that higher hardness, as measured by vickers, did not lead to less mass or volume loss in either metal.

PGI vice president Kevin Reilly says the results prove that platinum is the “most secure” setting for diamonds and gemstones.

“There was all this anecdotal evidence, as well as our institutional knowledge, that platinum has superior wear resistance and does not lose metal as the result of wear,” says Reilly. “We wanted to take all of that institutional knowledge and have actual scientific research to back it up. This has never been tested, not to this extent.”

In response, World Gold Council consultant Trevor Keel said by email: “White gold alloys and platinum alloys both have advantages and disadvantages when used as jewelry metals. The industry has long been aware that platinum tends to exhibit better wear-resistance properties than white gold alloys, and that is confirmed by the research commissioned by PGI.

“It is important to note that this study shows that both white gold and platinum alloys perform exceptionally well as jewelry metals, as is evident from the minuscule losses recorded during the lengthy testing cycles employed.”

While sponsored research always raises questions, Reilly says “one of the reasons we chose a laboratory like [fem] is we know that the results are going to be completely objective. All the data is available to see.”

And while many are uncomfortable with different products taking shots at each other, Reilly argues these tests are meant to educate.

“Our intention is not for this to be at all negative. This is to be informative. There’s a lot of misinformation out there, and there’s also a lot of need for education. Lots of bench jewelers have not had an opportunity to work with platinum and they may not be well versed in all of the technical aspects of working with platinum. So this was another opportunity for us to share information with the industry and give them objective information based on what we know about its unique properties.”