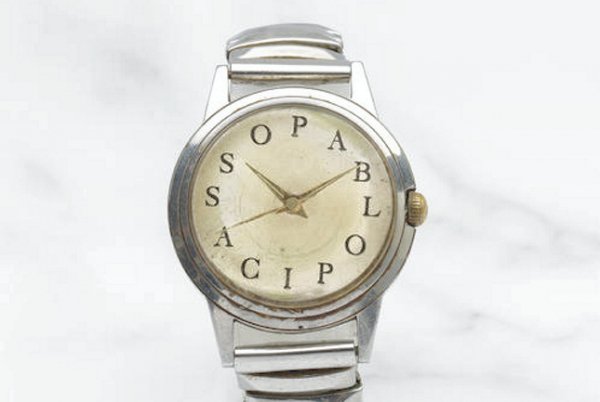 A personalized wristwatch made for the artist Pablo Picasso is to be auctioned.

The letters of his name are spelled out by the hour markers of the otherwise unremarkable Swiss stainless steel timepiece, made by the little-known Michael Z. Berger Co in 1960.

As Bonhams Paris point out in their auction notes, Picasso had the good fortune to have a name of exactly 12 letters.

“It is serendipitous that Pablo Picasso is 12 letters long and it was something he was surely aware of and was waiting to create when he had the chance,” they say.

Spanish-born Picasso, who died in 1973, was best known for such masterpieces as Guernica, La Vie, and Girl Before a Mirror.

He was photographed many times wearing the watch (pictured), most famously in an iconic set of 1960s images by Cecil Beaton.

Picasso, also known to have owned a Jaeger-LeCoutre and Rolex GMT-Master, gave the watch to his friend Lela Kanellopoulou, a Greek sculptor. It is being sold by a member of her family.

“In the world of horology, a small collection of relatively humble timepieces owned by the father of Modern Art are considered the Holy Grail of watches,” say Bohnams Paris.

“This is of great interest not only to watch connoisseurs but also to collectors of Picasso, and we very much look forward to seeing how it is received in the saleroom.

“Just occasionally I have had a chance to hold history and intrigue in my hands in the form of a watch, and this has to have been one of the most befitting to make a lasting impressionâ€” the likes of which I will not see again.”