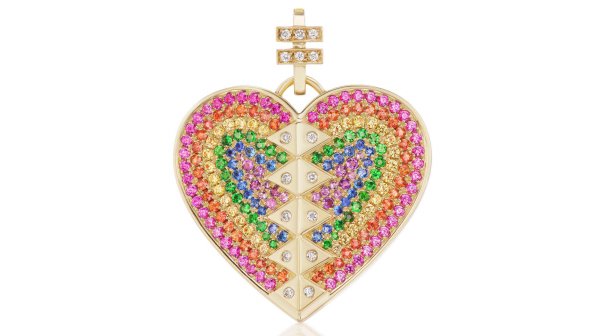 It donates 100 percent of profits to the Human Rights Campaign, which supports equal rights for LGBTQ+ citizens.

About a year ago, as people protested around the country against police brutality toward Black people, Lauren Harwell Godfrey created an onyx heart pendant from which 100 percent of the profits went toward the NAACP.

In little time, Godfrey had raised over $100,000 for the organization, and the style remains a collection mainstay, with all profits continuing to funnel to the organization.

Now, the jewelry designer is again using her talent to benefit a good cause.

“I personally chose HRC, the Human Rights Campaign, as the organization whose good work I want to support with the proceeds from this heart.,” Godfrey said.

“I believe in equality for all, and until the LGBTQ+ community is treated justly under the law, their human rights and freedom are in jeopardy. I created an heirloom-quality version of the iconic rainbow so that we can visibly show our support everyday: for Pride and beyond.”

The onyx pendant benefits the NAACP, the original malachite version continues to benefit World Central Kitchen, and the chalcedony edition donates to Futures Without Violence.