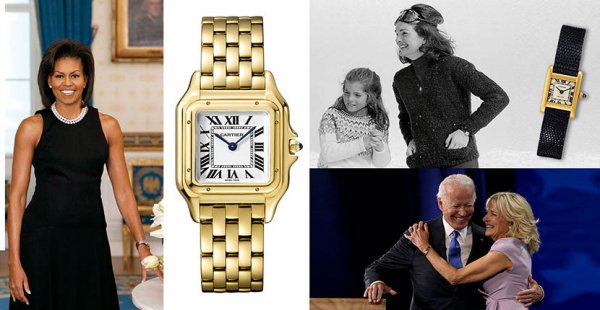 When it comes to watches, Cartier has the majority vote in the East Wing. More First Ladies have chosen Cartier than any other watch brand.

Jackie Kennedy received her Cartier Tank watch while she was the FLOTUS. Michelle Obama memorably sported her Tank Française in her first official White House photo. Dr. Jill Biden is now the third First Lady to wear a Cartier watch. Her timepiece is a gold Panthère de Cartier.

It’s not often we write about watches on The Adventurine, but these timepieces are noteworthy. They are personal accessories with special stories. The style of each also reflects the eras in which they were worn. Find out what we know for sure and a few theories we have about the Cartier watches below. 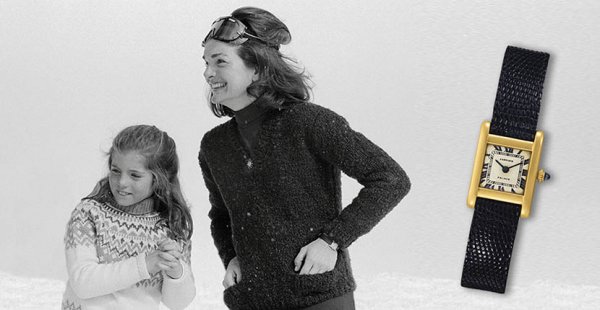 Despite the fact that Jackie Kennedy had hundreds of jewels and several watches in her massive collection, her classic gold Cartier Tank watch on a black lizard strap is among her most signature accessories. It was almost as ubiquitous as her big sunglasses during the late 60s and early 70s.

The history behind the timepiece includes an urban watch myth that has been circulating for years. The story was President Kennedy gave Jackie the Tank months before his death in 1963 and had it inscribed, “To Jackie, Love Jack.” Honestly, the alleged inscription always struck me as off by its excessive simplicity—no date, no message.

When the watch went on the auction block at Christie’s in New York on June 21, 2017, everyone learned the timepiece had a far more complicated and touching story behind it. 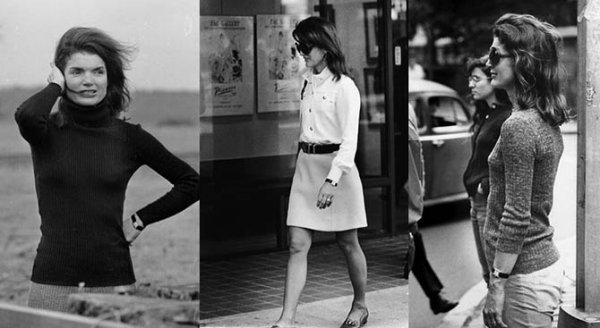 The times refer to the start and end of an infamous 50-Mile Hike in Palm Beach in 1963. The event grew out of President Kennedy’s visionary New Frontier policy that included improving the health and fitness of the country.

Stas Radziwill was among those tasked with making the march. Jackie celebrated Radizwill’s completion of the trek by painting a picture of him walking with a friend of the Kennedy’s Chuck Spalding. A dedication similar to the engraving on the timepiece is on the bottom of the painting. It says “February 23, 1963 2:05 am to 9:35 pm / Jackie to Stas with love and admiration.” (See the painting here.) 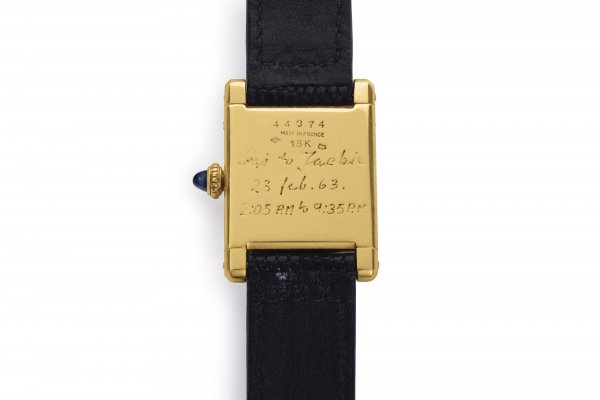 “The Jacqueline Kennedy Onassis Cartier Tank is a watch full of emotion, love and history,” said John Reardon, International Head of Christie’s Watches in 2017. “Together with Jackie’s painting, these two objects capture the spirit of another era, a time where friendship and the ‘can-do’ optimism of the generation seemed to make anything possible.”

Kim Kardashian acquired the Cartier watch and painting, which were sold together, from the Christie’s auction for $379,500 after an intense bidding war. At some point after 2017, it was quietly sold by Ms. Kardashian to the Cartier Collection. 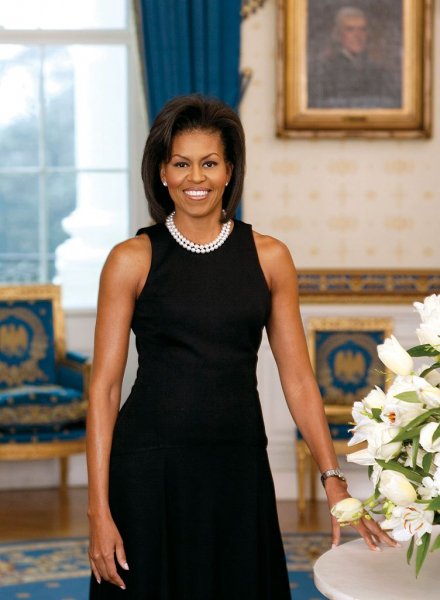 When First Lady Michelle Obama’s official photograph was release in February 2009 many people immediately took note of her toned arms that were shown off in the modest black Michael Kors sleeveless dress she wore while posing in the Blue Room of the White House.

I was more focused on the fact that she was wearing a classic double strand of pearls and studs and a medium model, steel Cartier Tank Française watch. The metal was a reflection of the low-key era of the early aughts we were transitioning out of. 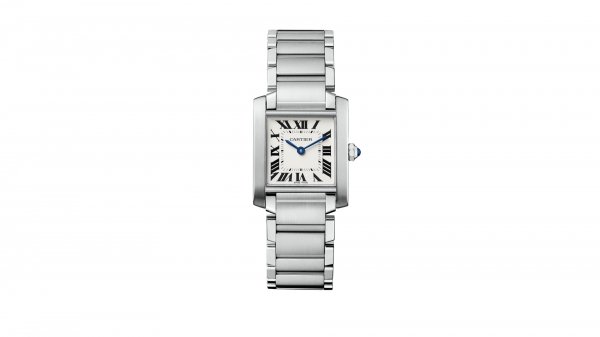 The CEO of Cartier at the time, Frederic de Narp, said the watch was “a most positive surprise” and added “maybe it was a gift from her husband.”

To my knowledge, the source of the watch has never been revealed. Mrs. Obama continued to wear it on and off while she was First Lady. A jewelry lover she often wore stacks of bracelets instead of the watch.

It was a moment when women, including yours truly, were abandoning watches for jewelry since they could easily find the time on their cellphones. 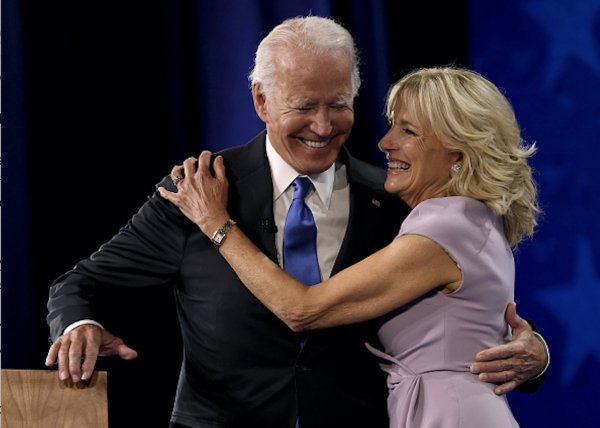 These women of style and substance instantly make me want to put a watch on my wrist again after over a decade hiatus. Why? Their timepieces say professionalism. They are not on their phones looking at whatever it is people do procrastinating on their devices nowadays. They are getting things done in real life. When they need to know what time it is, they look down at their watches. 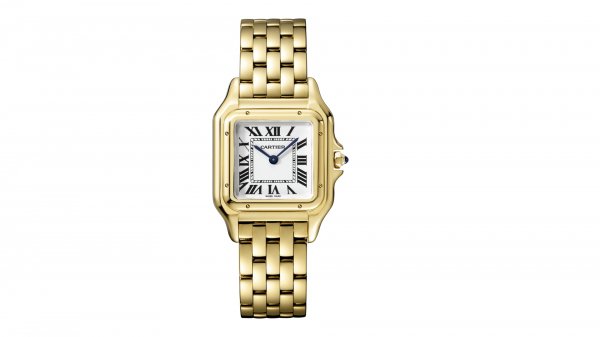 The last time Dr. Biden was in the national spotlight as the Second Lady of the United States, she wore a different watch. As far as I can tell looking at photos going back a few years, she did not seem to have the Cartier in September 2017. Since 2018, she has rarely appeared without it.

Jill gave Joe Biden a steel Rolex Datejust with a blue dial on a jubilee bracelet as a Christmas present that he wore during the Inauguration. It is not known what year she gave him the timepiece, but that design was introduced in 2017.

Cartier also reintroduced the Panthère in 2017. 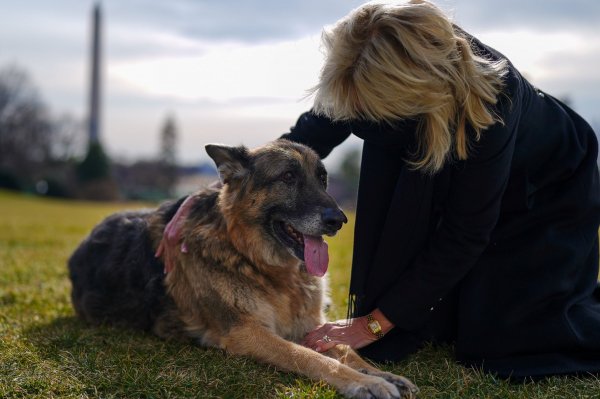 The Panthère watch, which was wildly popular during the 1990s and worn by stars including Madonna and Gwyneth Paltrow, was discontinued in 2004. Cartier decided to bring it back after noticing how popular vintage Panthères had become and spotting the timepiece on stylish stars including Kim Kardashian.

For those of you keeping score, that makes two times the reality star has had a brush with First-Lady-Cartier-watch-style. It’s not exactly how I expected this story to evolve, but as Shakespeare famously said “Politics makes strange bedfellows.” 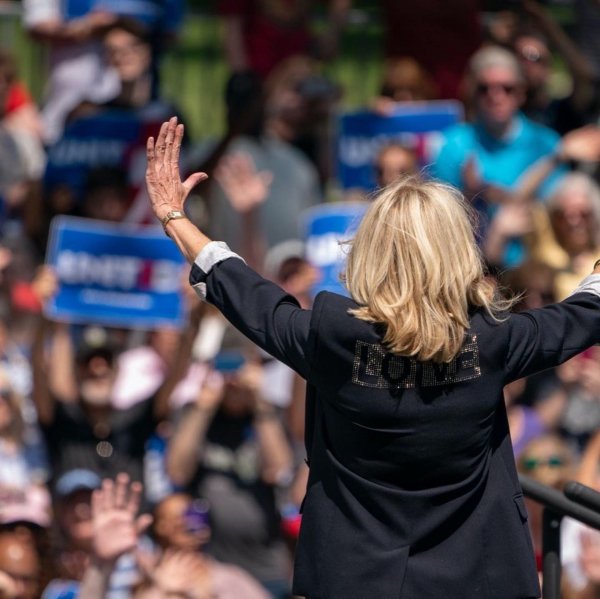