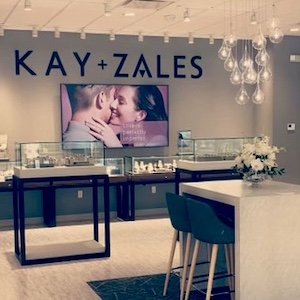 People know Kay Jewelers. People know Zales. But until now, no one had heard of Kay + Zales.

Yet, that’s the new retail concept Signet is testing. It takes the company’s two best-known mall brands—once fierce competitors—and brings them together in one space.

The first Kay + Zales opened in Lafayette, La., at the end of April. The second one just opened in Chambersburg, Pa. A third is planned for Johnson City, N.Y.

Another could open in the Dallas-Fort Worth area, but that opening has not been finalized.

The idea behind the concept is to service markets where “consumer demand couldn’t support both banners,” says Maie Amer-Guerrera, vice president of visual merchandising and in-store experience at Signet Jewelers.

It’s also a way for Signet to optimize its retail footprint. The Chambersburg mall used to have a Zales, and it used to have a Kay. Now, both those stores have been shut, and the mall has a Kay + Zales, which is slightly larger than the individual Kay or Zales stores were, though it occupies less square footage overall.

Amer-Guerrera says the company mulled putting the two stores next to each other before opting to try out this new shopping format.

While Signet has worked hard to differentiate its long list of nameplates, the mixing-and-matching seems part of a larger trend at the company. Signet has opened four Jared x James Allen combos in certain markets and is planning more for this year. It is also looking at ways to integrate its newly purchased rental service, Rocksbox, into the company.

The Kay + Zales stores have one entrance but two sides—one is for Kay (on the left); the other, Zales (on the right). Both sides stock the banners’ proprietary bands, so the Zales side carries Vera Wang, and the Kay side offers Neil Lane and Le Vian. Digital and other signage makes clear to customers which side they are standing on.

Products stocked by both banners—like gold chains—are stacked in the middle. In some stores, it’s Zales merchandise; in others, it’s from Kay.

There’s been a real effort to make the two sides distinct—with each retaining its own “brand essence” and having separate points of sale, says Amer-Guerrera.

“If you are standing on the right [Zales] side, there is a big, bright, bold, and colorful palette. The Kay side, the colors are, I wouldn’t want to call them softer, but more aimed at the sentimentalist shopper.”

The new combo concept is “very different than anything we’ve done before,” says Amer-Guerrera, who admits that she’s seen other retail mash-ups and hasn’t been that impressed.

“We really tried to walk through and understand what our brand value prop is, and how do we pull the two of them together. We are looking at it from a consumer standpoint: How do we make sure we give them the stylish jewelry from Zales, with that gifting and bridal from Kay?” 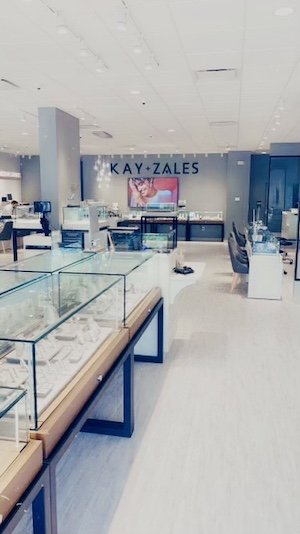 It’s too early to tell how well the concept is working, but Amer-Guerrera notes the staff seems to enjoy “being cross-trained to sell both Zales and Kay products.”

Whether or not Kay + Zales flies, it’s one of “six new retail concepts” Signet has in the pipeline, Amer-Guerrera says.