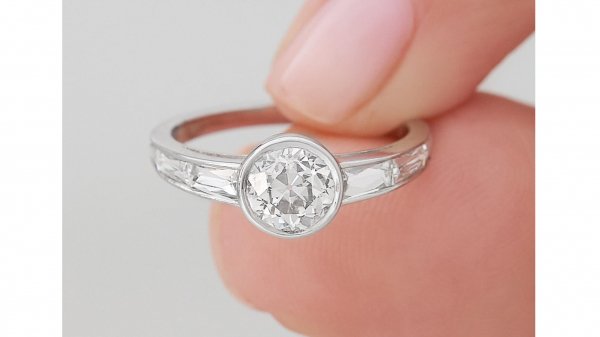 With factories shut down and sales of new metal hampered, retailers took the time to sell aged inventory to boost business, according to PGI.

Platinum jewelry sales were up in the U.S. last year, despite challenges brought on by the pandemic. Pictured is a diamond and platinum ring from Single Stone ($15,800). Hong Kong—Consumer attitudes and behaviors have changed a lot over the past year as the pandemic forced a rethinking of priorities.    Jewelry has benefited from that, and, according to the Platinum Guild’s latest Platinum Jewelry Business Review, platinum jewelry was able to reverse the downward trend brought on by COVID-19 as consumers wanted to mark special moments with meaningful items of value.    In the U.S., jewelers benefitted from “diverted” consumer spending, the review showed, as shifting priorities led them to jewelry to satisfy their desire for value and meaning.    PGI said it experienced a significant increase in requests for support from retailers that wanted to pivot from white gold and capitalize on platinum’s more accessible price point. (It averaged $882.63 per ounce in 2020, according to Kitco, as gold prices skyrocketed.)    Platinum jewelry sales in the U.S. last year were up 3.4 percent year-over-year, according to PGI. While factories were shut down and sales of new metal to manufacturers were hampered, retailers used the opportunity to sell aged inventory, leading to a net increase in business.    PGI’s annual retailer survey showed that more than half (51 percent) of the 300-plus retailers sampled reported growth in platinum jewelry sales last year, with 21 percent indicating they saw no change and 37 percent reporting a decline.    As a comparison, gold jewelry demand in the U.S. was down 10 percent in 2020, driven by the impact COVID-19 had on consumer income and gold’s high price.    In the platinum category, both bridal and diamond fashion jewelry did well last year, leading manufacturers to prioritize the metal.     Le Vian, for example, launched a new platinum collection at Jared in more than 130 stores, which has since expanded to 180 additional jewelry stores.    The jewelry brand’s 2020 platinum sales exceeded projections by 62 percent, PGI said, and it called platinum the “2021 Metal of the Year” in its Red Carpet Revue Trend Forecast.    The U.S. industry is expected to continue its recovery in 2021, showing strong sales in Q1 after a relatively strong holiday season.    PGI said it predicts platinum jewelry retail sales to grow for the eighth consecutive year by 7-12 percent year-over-year.    Meanwhile, the Japanese market saw significant disruptions from the second quarter of last year onward due to the pandemic and postponed Olympics, PGI said.    Platinum jewelry retail sales in the country were down 10 percent year-over-year.    PGI and its industry partners launched a collection-based marketing initiative called “Platinum Woman” to target younger Japanese consumers, marking the first time several of the country’s biggest retailers partnered on a shared sales platform.    The collection was carried on both e-commerce channels and in 200 physical stores. PGI said it reached over 10 million consumers aged 18-34 and will expand this year.    Platinum jewelry sales in 2021 in Japan are likely to have a “modest increase,” and PGI said it will continue to promote to younger consumers as well as affluent older consumers.

PGI retail partners in China meanwhile saw platinum jewelry sales decline 11 percent year-over-year.    Platinum jewelry growth seen in the second half of the year was driven by retail chains shifting focus toward platinum and expanding into new cities.    Manufacturers prioritized product innovation and new designs for collection-based products, and saw platinum as a driver of recovery, PGI said.    The organization launched “Reboot,” a province-by-province initiative to drive re-stocking of new products and large-scale sales activation.   It covered 1,277 retail stores and reached 13 million consumers, with year-on-year sales increasing up to over 40 percent.    And in India, which was perhaps most severely disrupted by extended lockdowns from March to September, the industry didn’t start to see sales momentum last year until October.    This meant PGI retail partners saw a 36 percent year-over-year decrease in sales in 2020.    PGI India aimed to help drive store traffic by adapting its existing social and digital media strategies, initiating the “Season of Hope” program to encourage consumers to get back into stores.    Participating retail partners in 300 cities reported a 33 percent year-over-year platinum jewelry sales increase during the promotional period, PGI said.   Also, in Q4 2020, PGI’s retail partners posted a double-digit year-on-year sales recovery, helped along by pent-up demand from deferred weddings, a sharp uptake in consumer sentiment, and the recovery program.    However, a severe second wave of COVID-19 has continued to impact the country, stalling consumer demand and keeping retailers cautious in the near term.    Globally, PGI said it predicts a K-shaped outlook for platinum this year—players who invest now will be able to gain market share “relatively inexpensively,” while those who rely on the market to lead recovery risk facing a challenge post-COVID environment, it said.    To read more about the results of the Platinum Jewellery Business Review, visit PlatinumGuild.com.
Source