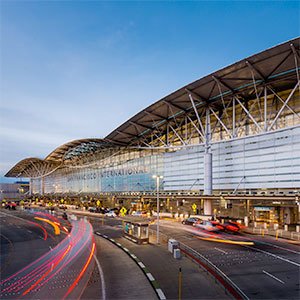 Last month, around 70 colored-stone dealers flew from India to attend one of the handful of gem shows taking place this year in Tucson. But, according to a report in India Today, when they landed at San Francisco International Airport (pictured), they were stopped by U.S. Customs and Border Protection (CBP) agents, who checked if the gem dealers had the proper business visas.

When most didn’t, not only were the dealers denied entrance into the United States and sent on a 17-hour flight home, but some were banned from reentering the country for the next five years, the report says.

It’s an unpleasant, unfortunate episode that has troubled some in the trade and gladdened others. And it will likely lead overseas dealers to take greater precautions before they visit the United States.

The exact facts are murky—and without an official report, they may remain so. A CBP spokesperson confirms that “a group of Indian nationals were refused entry at San Francisco International Airport recently,” but says the agency can’t reveal more for privacy reasons.

Still, both reports—and the trade grapevine—agree on the basic outlines of what happened. The dealers were said to have carried B-1/B-2 visas—tourist visas that also allow visitors to enter for short-term business purposes. They do not allow their holders to sell goods. Which was a problem, as some of the visitors planned to do just that.

After the flight landed, CBP officers inspected the dealers’ visas and held them for questioning, sometimes using threats of prosecution to gain confessions, India Today reports. One dealer called the conditions in detention “inhuman” and “freezing cold.” The CBP spokesperson responds that its “officers examine individuals and their related documents in a professional manner and respect [their] rights and dignity.”

The situation is highly unusual in any case, says Doug Hucker, CEO of the American Gem Trade Association (which canceled its Tucson show this year, and wasn’t part of this incident).

“The United States is not as strict in oversight of visas as we could be,” he says. “We’re not as strong as some of the European countries. When our dealers go overseas, they have to fill their Carnets [customs documents] very carefully, because if they don’t, they could get whacked with value-added taxes.”

He is not sure why the rules were enforced now, but believes it’s possible that COVID-19 has increased scrutiny about who comes in the country. He thinks this will send a strong message.

India Today calls the episode a “major embarrassment” and says that Indian dealers will likely be more scrupulous about their visas in the future. India’s Gem and Jewellery Export Promotion Council tells JCK that while it doesn’t know the exact facts of the incident, “we immediately sensitized all our members with an advisory to check the visa regulations before traveling to the United States for business.”

JCK reached out to some of the people listed in the reports but hasn’t heard back. The reports mention rumors that the authorities were tipped off ahead of time, possibly by a local jeweler. Some point to the airport having a Hindi translator on hand as proof.

Whether or not that’s true, some U.S. dealers have long felt that overseas brethren don’t follow the same rules they do, Hucker says.

“They have always complained that you have people that are coming in the country, they’re doing a significant amount of business, they’re selling gemstones, putting money in their pockets, they’re going home, they’re not paying taxes, and that puts our dealers at a competitive disadvantage.”

Adds one New York City dealer: “[The United States] should have been enforcing the rules all this time. If [overseas dealers] want to come here and do business, let them set up a proper business, get a license, go through the process, like all of us did. Then they will be on the same playing field as us. We all collect taxes. They should too.”

India Today says that the dealers have asked the Indian government to help lift the five-year ban. But it doesn’t think that will happen, given what it called a “clear-cut case of visa violations.”

It is certainly possible that a few dealers may have gotten unfairly caught in the net. One industry official claims some of the dealers really did plan to just visit the show, not sell there. India Today says “[s]ome argue that the sheer number of deportees—70—means that at least some of those who fell afoul of the law were genuinely ignorant of the fact that their visa did not allow them to sell gems despite allowing them to visit a gem exhibition.”

Of course, as the old saying goes, ignorance of the law is no excuse. Those dealers may or may not have been aware of the rules. They probably know them now.

Ordinarily, I’d end this post here. But this issue isn’t the biggest problem in India right now; COVID-19 is. Today, India reported 414,188 new cases of the virus in the last 24 hours, as well as 3,915 deaths. That case count is a new global record.

The World Federation of Diamond Bourses has launched a campaign to help the people of India, which is an enormously important diamond center. I urge you to support it.