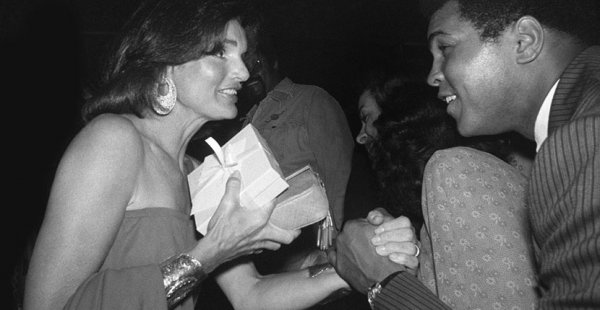 March 30, 2021—Some jewels instantly conjure up historical images and moments in time. I had just that kind of flashback when Frank Everett showed me a Van Cleef & Arpels Manchette Cuff-Bracelet in the Sotheby’s New York, April 15, 2021 Magnificent Jewels auction.

Jackie Kennedy had a mismatched pair of Manchettes, she wore on August 26, 1977 during a party at the Rainbow Room in New York City celebrating the annual Robert F. Kennedy Pro-Celebrity Tennis Tournament. The event benefitted many social and education charity programs for underprivileged children as well as the RFK Memorial. As far as I know, it was the only time she wore the jewels publicly but with Jackie once was enough.

The jewels were a gift from Jackie’s second husband Aristotle Onassis in 1973. He gave her lots of pieces from Van Cleef & Arpels during the course of their marriage that began in 1968 and ended when he died in 1975. The abundance of Van Cleef he bought always reminds me of the line his former lover, opera singer Maria Callas, told the shipping magnate’s biographer Peter Evans, “Ari’s total understanding of women comes out of a Van Cleef & Arpels catalogue.” But I digress. 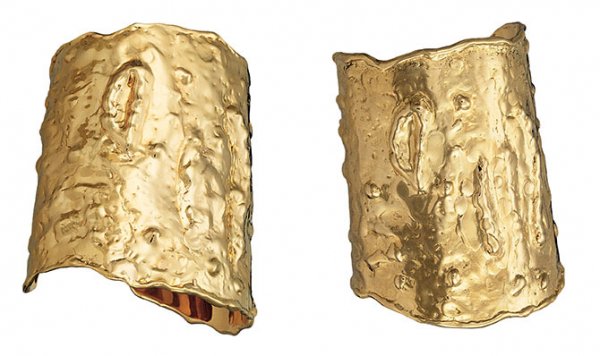 According to Van Cleef & Arpels, the Manchette Cuffs are inspired by Etruscan goldwork and often called Etruscan Manchette bracelets. I can see the spirit of the ancient styles in the design when I compare them to the 4th century gold Etruscan earrings at the Metropolitan Museum of Art.

The surface of the jewels, however, also reminds me of so much of the gold designs made during the 1970s that were a tribute to the 1969 landing on the Moon.  It was an event Onassis celebrated with a couple of other jewels he gave Jackie. For her 40th birthday, he famously commissioned the Apollo 11 Moon earrings from LALAoUNIS.

He also gave Jackie a pair of Van Cleef & Arpels Creole hoop earrings made in 1970 that were decorated with a lunar pattern. Coincidently, Sotheby’s has a pair in this style in a dazzling selection from The Collection of Michelle Smith being sold on April 22. (There is also a pair of contemporary Manchette’s among Ms. Smith’s jewelry at Sotheby’s.) 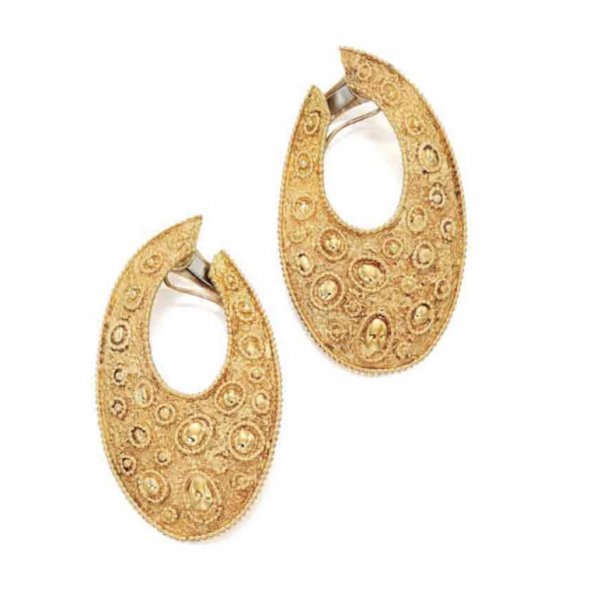 Back to that summer night in New York City, what made the occasion so memorable was not only how cool Jackie looked in her Van Cleef Manchettes, Creole earrings and strapless red dress, that feels like it was probably by Halston, it was also an iconic photograph that was taken of former First Lady with boxing GOAT Muhammad Ali. It’s just a great image of two iconic Americans doing good works in a City that needed all the help it could get.

The event took place when the city was in big trouble. It was in the midst of a deep recession, urban decay, labor strikes and there had been a mass exodus with over a million people moving out. Just two years before the party at the Rainbow Room, President Ford said he would not help the City with a Federal bailout. It was an act that led to a famous headline in the Daily News, one of New York’s tabloids, “Ford to City: Drop Dead.” 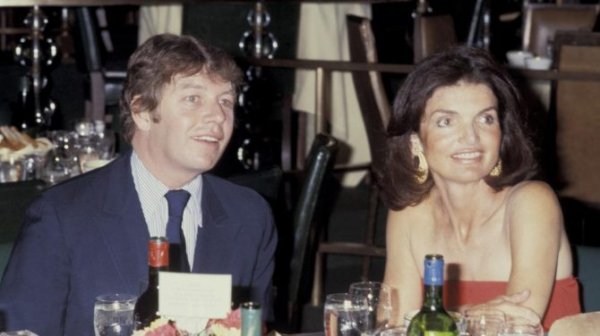 At the time tabloids employed legendary writers like Pete Hamill, who escorted Jackie Kennedy that evening in 1977. The color photo of the couple who dated for a period is the second legendary image of the evening.

While many had left Gotham for greener pastures during the dark days of the 1970s, those who stayed and helped bring it back to life are etched in the city’s history forever.