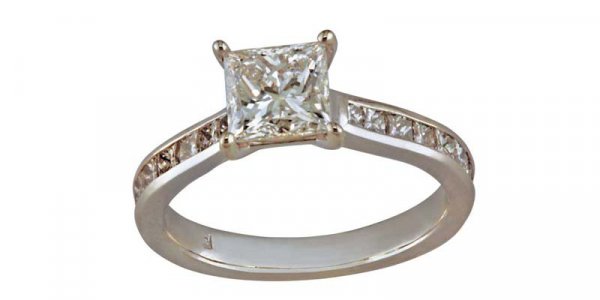 This article was inspired by a situation I encountered a few years ago of which I was reminded recently by a job a client brought in for insurance restoration. This sort of thing happens relatively often, unfortunately. Let me set the scene.

A good friend and colleague in the United States called me several years ago. She had made a custom ring for an out-of-town visitor, who then returned to Calgary where I am based. It seems that after only a few months, the client had lost a diamond in her eternity band. She called the shop that had made it and my jeweller friend asked if she could refer her to me for repair, rather than deal with the issues of cross-border shipping.

Always happy to help out a friend, I agreed to offer assistance. The client and her ring came in shortly after. The ring was, unfortunately, problematic.
It was a cast piece made in 18-karat yellow gold with shared prongs. The diameter of the diamonds was such that their girdles extended well beyond the width of the claws and could easily be caught when doing something as simple as putting your hand in your pocket. Eventually (and in this case, far too soon) something was going to give. To make it worse, the claws were not beefy enough to offer enough holding power.
I was absolutely amazed the client had lost only one diamond. The ringÂ  just did not have enough structure to physically support the stones.

We could have simply reset the lost diamond and sent the client on her way except for the fact that once I have worked on a piece of jewellery, I feel responsible for it from there on. I could not in good faith see any possible way to simply repair the ring. That said, I was also not willing to become ‘married’ to the piece, since I knew the client would be back again and again as more stones fell out. What it really needed was to have been made properly in the first place.